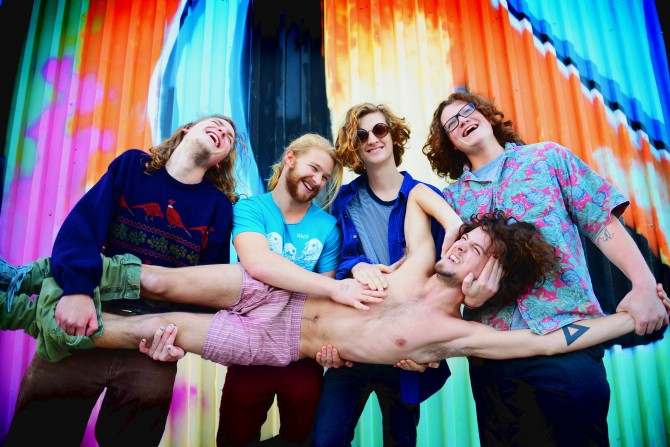 The members of Sun Club are still trying to wrap their heads around the notion that very soon, their first album will be available. “To be talking in the sense of having a real album, “ says multi-instrumentalist Shane McCord, “and to think that this is actually being released properly, it’s this weird, absurd thing.”

On October 30th, Sun Club’s debut full-length The Dongo Durango will be let loose into the world by ATO Records. This new 9-song collection finds McCord and his bandmates joyously deconstructing the traditional pop song—then rebuilding it with off-kilter time signatures, gleefully unhinged vocals, and sunny hooks that sink deep into your already fevered brain.

The album also stands as the culmination of a long, bumpy, and funny history for these young Baltimore players. Starting almost 10 years ago, when they were barely teens, Shane, his brother Devin, and their next door neighbor Mikey Powers did as most young wannabe musicians do: dreamed of stardom before they had even played a note together. “All we did was have band meetings,” Shane remembers, laughing. “We’d be jumping on a trampoline and talking about the names of our first 20 albums and changing the name of the band every week.”

Eventually, the three cobbled together some actual instruments and started slowly learning how to play music by listening to their favorite White Stripes, The Beach Boys, and Devo tunes. What followed was a good five years of changing out band members, playing rough-and-tumble shows at parties, getting better as musicians, and learning how to write songs. “We used to play metal until [multi instrumentalist] Kory [Johnson] joined in 2010,” Shane says. “Then we became a grunge band that slowly shifted into writing pop songs.” The catalyst for this final step in their evolution was the inclusion of bassist Adam Shane, who jumped on board in 2012.

From that point on, Sun Club took off down the path that hundreds of bands have followed for the past 50+ years. The quintet toured endlessly, moving from basements to bars to bigger-venue opening gigs for the likes of Alvvays, Fidlar, and Fat White Family, and touring the U.K.

After self-releasing one well-received 7” and putting out an successful EP, the group then started recording The Dongo Durango with their longtime collaborator and producer Steven Wright. Using an old warehouse space just outside of Baltimore as a makeshift studio, Wright set about recording the band live, all the better to capture the raw energy of their raucous performances.

Once The Dongo Durango drops at the end of October, Sun Club plans to spend the better part of the next year on the road to support the new album. After all, relentless touring, crisscrossing the country in a van named Booty, winning the hearts of new fans with every date, is what got the Baltimore band here in the first place. “Our beloved van Booty caught fire the day we announced the new album,” says Kory. “We have now got a new van which we will be naming Booty 2.0. It’s symbolic of a new era to us; a new chapter for us as The Dongo Durango becomes public to the world.”