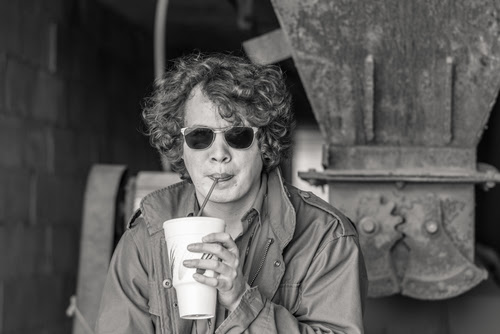 Trevor Sensor will release his debut album Andy Warhol’s Dream on June 16th via Jagjaguwar. The album was recorded at Steve Albini’s Electrical Audio studio in Chicago, IL and was produced by Richard Swift (The Shins, Damien Jurado), Foxygen’s Jonathan Rado and Brandon Darner (Imagine Dragons, The Envy Corps). Backing Sensor up is a rhythm section of Julien Ehrlich (drums) and Max Kakacek (bass) of Whitney.

Today, Sensor shared “High Beams,” the first single from the forthcoming album. Noisey spoke with Sensor about his new album and said “in his distinctly coarse timbre that he follows in the tradition of Mellencamp, Tweedy and Oberst, in portraying a literate and working class Midwest, and the album is full of autobiographical tales and characters.”

“The song derives from the desire to be one of those people on the television – a desire instilled in us since childhood in America and the western world at large. A desire that consumes us, especially those few born in middle America who look for supposedly greater things beyond the horizon of cornfields and prairies, or the northern factory towns of England – those places where nobody of any pop cultural significance is suppose to come from – for there is only so much room in the camera lens, the television screen, and we must save it for the pretty, plastic people,” Sensor explains. “It revolves around things lost, things hoped for and the dreams we tell ourselves to keep us from the possibly horrifying conclusions that forever creep up on us in the back of our minds. To these conclusions and this desire, I curl back my feelers and hiss – for I am twenty-three and tired.”

Sensor recently shared a video for “The Money Gets Bigger.” The album’s title refers to Warhol’s prophesy of a world in thrall to twin false idols of fame and celebrity. “His ’15 minutes of fame’ prediction is clearly visible today,” Sensor explains. “I’m only really referencing Warhol as a vehicle for the ultimate representation of celebrity culture because of his repeated Marilyn Monroe or Elvis paintings or whatever. But now we’re in a post-God society that is finding new golden calves to worship, that is moving beyond that.”

Trevor Sensor has just announced a spring and summer tour with The Family Crest and Mt. Joy, respectively. Find a full list of tour dates below, with additional dates to be announced in the coming months.