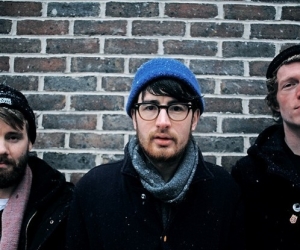 TRAAMS has premiered the video for “Flowers” from their debut album, Grin, out September 24 on FatCat. The grungy “Flowers” video was directed by James Burgess this summer, featuring TRAAMS being drenched in psychedelic goo. TRAAMS’ Stu Hopkins said, “We did the video on a sunny afternoon in my garden. We’d met James Burgess before when we played a show with his band, Boneyards, and really liked the videos he’d done for them and Flamingods. He pitched this idea of pouring gunge all over us and green screening stuff onto it. Which we thought sounded cool. The closer we got to the shoot we realised that we couldn’t find any gunge so we ended up dying custard green and using that. We sat in a paddling pool with the custard being poured over us while singing. It was a good day.”

Grin is the follow-up the recently released  Ladders EP and was recorded throughout 2012 and 2013 with producers Rory Atwell and MJ from Hookworms. The band has supported Parquet Courts, Fildar, Hooded Fang, Dope Body and many others in the past year.