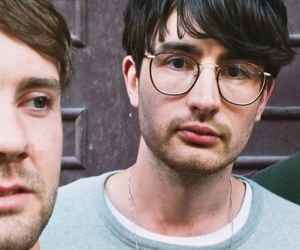 UK-trio TRAAMS’ debut full-length, Grin is set to be released September 24 on FatCat.  “The upcoming LP collects 11 tracks of tunefully deranged, remarkably giddy guitar-pop that reimagines early Modest Mouse as a Krautrock-fluent crew.” Earlier this summer the band premiered the new video for the album’s lead single “Flowers” which was directed by James Burgess this summer, featuring TRAAMS being drenched in psychedelic goo. The video is now available YouTube.

Grin is the follow-up the recently released  Ladders EP and was recorded throughout 2012 and 2013 with producers Rory Atwell and MJ from Hookworms, the aptly-titled Grin is eleven tracks of pure distorted joy. The album successfully captures the raw energy of TRAAMS’ frenzied and sweaty live performances, as witnessed supporting bands like Parquet Courts, Fildar, Hooded Fang, Dope Body and many others.