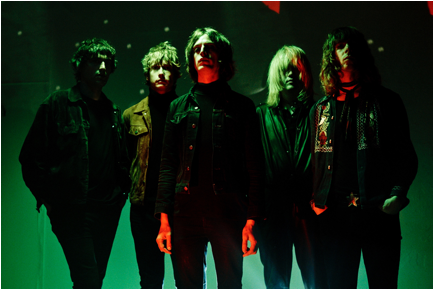 TOY have shared the new video to “I’m Still Believing”, the latestsingle from their forthcoming release Clear Shot, due for release on Friday 28th October on Heavenly Recordings. The album was recorded with producer David Wrench towards the end of 2015 at Eve Studio. Toy, also recently unveiled “Fast Silver”, the first track to be taken from the album.

The director, London-based filmmaker Bunny Kinney, envisioned a video aesthetic resembling an old stumbled-upon VHS tape that had been recorded over numerous times, complete with snippets strange programs and advertisements left behind from previous owners that flicker and fade in and out of the footage of the band performing.

Chris Coady (Beach House, Smith Westerns, Yeah Yeah Yeahs), who mixed the album in LA with some of the reverbs and vocal processors used on Purple Rain, across the 10-tracks strands of ideas appear, sink and re-emerge in an almost modal jazz manner. Clear Shot sees TOY working both in bigger colours and more minutely crafted detail, achieving an altogether higher level of artistry than before.