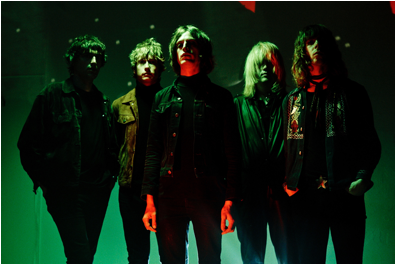 TOY have shared the brand new, Bunny Kinney-directed video for “Another Dimension”, the latest track to be taken from their recently released album, Clear Shot. Released in late October on Heavenly Recordings, Clear Shot, recorded with producer David Wrench towards the end of 2015 at Eve Studio, is the band’s third album.

Taking inspiration from an esoteric blend – Radiophonic Workshop, Comus, the scores of Bernard Herrmann, John Barry and Ennio Morricone Fairport, COUM, Acid House, Incredible String Band, The Langley Schools Project, The Wicker Man soundtrack and even the direction behind Electric Eden, Rob Young’s book about the development of folk music in the U.K. – Clear Shot is their most coherent and confident album to date; lushly cinematic, shot through with their most expressive melodies thus far and coated with a ‘sheen’ courtesy of Chris Cody (Beach House, Smith Westerns, Yeah Yeah Yeahs) who mixed the album in LA with some of the reverbs and vocal processors used on Purple Rain.

TOY previously released their self-titled debut in 2012, as well as, Join the Dots at the end of 2013. They have also recently made their Spellbound EP available digitally. The EP, featuring Spellbound, News From Nowhere, Poor Jack & Love Seeker, was recorded during the band’s album sessions and was initially available as a limited edition CD with initial quantities of the album purchased via UK independent record stores.