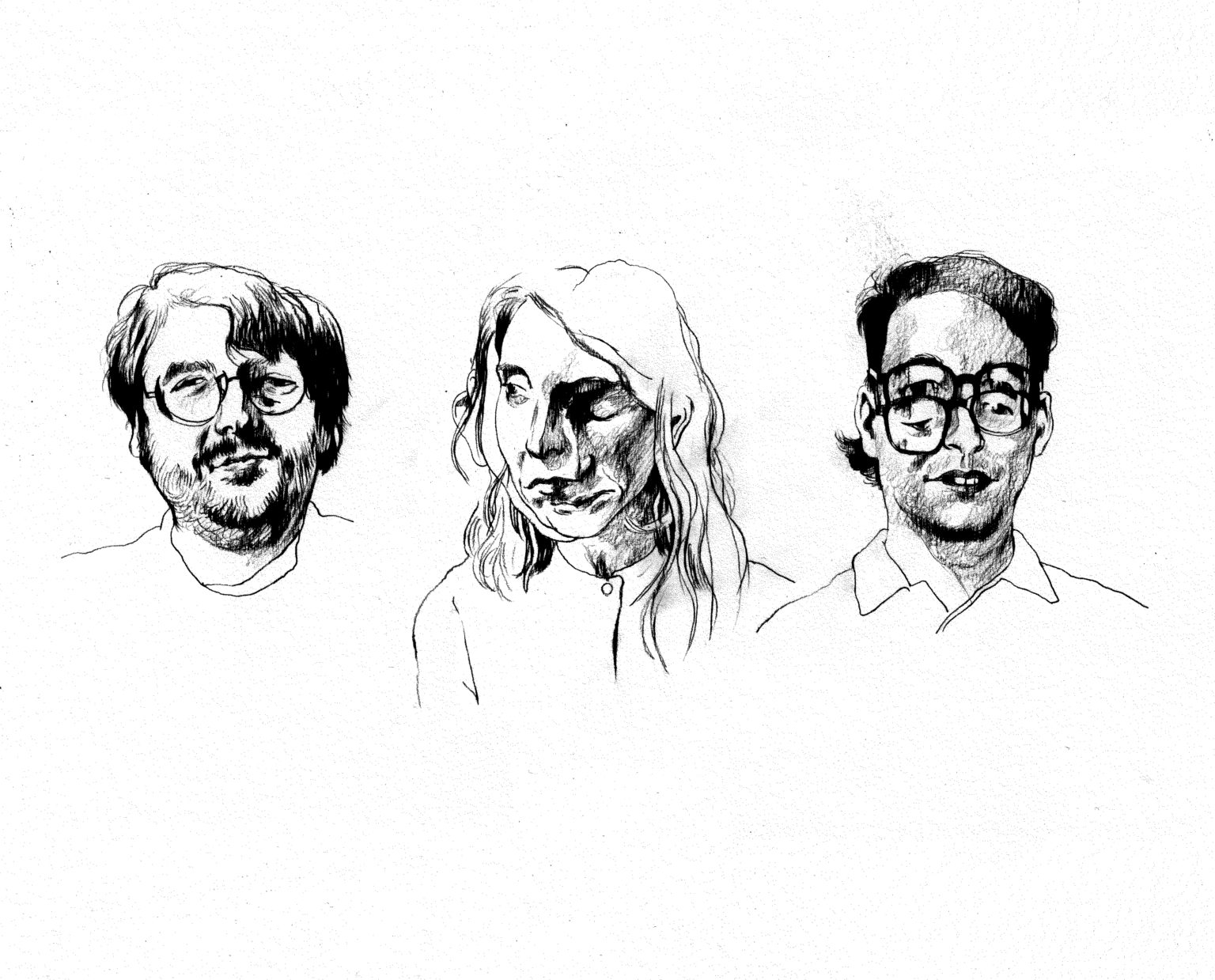 Tough Age’s fourth album, Which Way Am I?, shows an ever-changing band in constant motion. But it also shows a satisfying consistency throughout their work, be it in their music, album art, writing process, or operating principles.

Every member of the Toronto trio – Jarrett Samson, Penny Clark, and Jesse Locke – is a comic book fan. Jarrett and Penny are also involved in the city’s comic scene. The band have worked with comic artists including Patrick Kyle, who designed the cover art for their 2017 album, Shame, and, earlier that year, Ginette Lapalme, who did likewise for their Unclean 7-inch. Most recently, she returned to create the music video for WWAI’s second single, “My Life’s A Joke & I’m Throwing It Away.”

Meanwhile, Connor Willumsen designed the band’s latest cover art and made illustrations of Jarrett, Penny, and Jesse that will appear on one side of the album insert. Not only were the illustrations practical happenstance – the pandemic prevented Tough Age from getting together to take new band photos, and Connor was already doing quarantine portraits – they fulfilled Jarrett’s fantasy of turning Tough Age into a bubblegum band.

Tough Age rarely give notes to the artists they work with because, Jarrett says, the artist knows best. Yet by pure coincidence, like all three of its predecessors, WWAI features collage-style artwork. The band’s songwriting also always follows a cut-and-paste approach, but their sound has changed with every record, spanning clattering garage-surf and heady jams that flood the senses.

One of the most significant changes to the band’s songwriting process is Penny’s growing contributions. Although every member has always contributed, they’ve begun writing more collaboratively. “This is my first band I ever played in. For the first couple of albums, I was still pretty much learning how to play in a band,” she says with a laugh. But now she’s more comfortable flexing her lyrical muscles. “By these two albums [Shame and WWAI], I feel like I’ve got that down, and now I can contribute creatively more.”

And her contributions are some of WWAI’s brightest highlights. “Penny Current Suppression Ring” pokes fun at Jarrett’s obsession with getting signed to legendary New Zealand imprint Flying Nun Records. But the song isn’t a direct Jarrett slam, she explains: it also pokes fun at her love of livewire Australian rockers Eddy Current Suppression Ring, to whom the song bears a strong sonic resemblance. Moreover, “Penny Current” is about the idea of chasing a goal you think will make you happy, but it won’t actually make you happy. As for the title’s wordplay, Jarrett adds that not signing Tough Age is the “current suppression of Penny.”

While she continues to grow into her songwriter role, Jarrett continues to grow less comfortable with the concept of the front person being the most important member. “It’s just because I talk so much or I’m the singer,” he points out. “I became a lot less comfortable with saying, ‘I wrote these songs,’ because I don’t write the drums; I don’t write the bass parts.” Even if he presents an idea, it’s shaped by the other members’ choices. “This record, there’s no songwriting credit unless I screwed up and put a songwriting credit I didn’t mean to, because in my mind, they’re all just Tough Age.” Songwriting credits can be muddy, muddled business, but what’s clear is that like Shame, WWAI is divided into two distinct sides.

Its first half is tightly wound and high in energy, whereas its second half is suffused with elongated, ruminative jams. Late Jim O’Rourke era Sonic Youth lingered in the band’s subconscious, resulting in album standout “Patience of Mind.” Neither Jarrett nor Jesse realized this influence until they’d written the dreamy track, which drips like the most entrancing passages of Sonic Nurse and Murray Street. Jarrett admits he listened to the latter “religiously” while writing WWAI.

The album’s two sides play out as a full emotional cycle. “Side A is like thrashing, when you realize you’re gonna drown, and side B is like resignation, a peaceful letting go,” Jarrett says. Less morbidly, he offers, side B is trying to find calmness amongst chaos.

Side A is rife with self-deprecation, crises of confidence, hopeless desire, and defeatism. “I started sequencing [side A] with the notion of ending with ‘Anti-Anxiety Exercises,’ which is [Penny] literally doing exercises in calming down,” Jarrett explains. By the time side B opens with “Repose,” which Penny compares to a calm and solitary night, she is composed. “I get a lot of feedback that people like it when my vocals are more punk, and that can usually come from a pretty negative place, where I write those songs from. I wanted to try something different for ‘Repose,’ so the thematic shift and the delivery shift all came together.”

Her intention behind “Repose” also stemmed from her Shame song “Me in Glue.” “That’s a song about feeling anxious and discontent. A lot of people can relate to that, so it’s good to have a song that celebrates that. But also, I don’t have that bad of a problem, so I can try and focus on other stuff, too.” For listeners like Jarrett, her shifting focus has an obvious benefit: “Penny calms down across her three songs, but she also calms me down throughout those songs.”

When it comes to storytelling, WWAI is a particularly significant achievement for Jarrett. “This record is the first one where I feel I did that justice in the sequencing,” he says proudly. “It was very on purpose how I wanted the two sides of the record to be very at odds in their approach or have one be the mellow-out side.” WWAI ends with the glistening, sublime “In a Desert,” which describes a placid, modest fantasy of drinking tea beside the sea.

WWAI is also notable for its expanded instrumental palette. Tough Age have included flute in their recordings before, on 2015’s I Get the Feeling Central, but this time, there’s more than just one note being played over and over on one song. Taking influence primarily from Look Blue Go Purple, one of Jarrett’s Flying Nun favourites, Claire Paquet of Towanda plays flute on “Possession.” “Jarrett always likes to hear flute, and if he can have an excuse to make flute happen, he will take it,” Penny reveals. And although she played synth in the now defunct psych-rock band Century Palm, Jarrett was the one who played all the keys on WWAI. “You can tell because they’re not complicated or good,” he says, laughing.

This kind of self-deprecating humour characterizes much of Tough Age’s writing. But it’s all to keep Jarrett’s ego in check. “I think I’ve long since thrown my ego away,” he says before acknowledging that this might be an egotistical thing to say in itself. Regardless, though, he continues: “Everyone’s big deal is nothing to anyone else.”

There’s no humour when Jarrett criticizes himself on “Consequences,” however. The song is about forgiveness and accountability on both sides and the realization that we often hold other people to standards we don’t hold ourselves to. And when the two sides are old friends, a complicated question arises: “How do you grow and move forward with someone who you were close with as one type of person when you both become new people?” Jarrett wonders. “But also, I think in that song, that reconciliation doesn’t happen.”

Even though Tough Age find themselves at emotional impasses on Which Way Am I?, and they don’t always find resolution or closure, they seem sure-footed as they continue moving forward. And as long as they keep doing the work to dissolve their egos and hold themselves accountable, whichever way they’re going is the right way.

Which Way Am I? is out this Friday, August 7 via Mint Records.