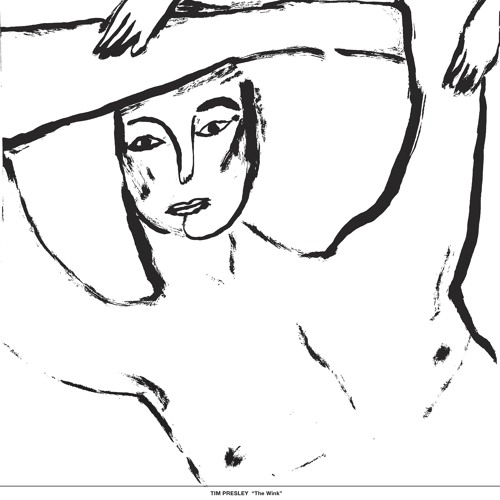 On the cover, a bare chest and bits of bodies sketched in jagged lines of black and white. Inside, in full calour, we find Tim Presley. The man behind White Fence steps into the solo light on September 16th with The WiNK. Listen to the fist single “True,” below.

“Tim Presley’s guitar hand has a powerful, yet quicksilver touch, with metallic brilliance ALWAYS, esp. in rhythm figurations, where it wrings chords out like panic signals, highlighted on “Clue” where a smooth and steadfast lyric melody is supplanted by a throw of broken guitar and shards of keys and drum beats. The tension is unbreakable, a thin plastic slip, as he intones upon a maze of high wild mercury stings.

The WiNK was produced by Cate Le Bon, who brings Tim Presley’s solo statement into focus somehow from without, by leading Tim the long away around to make a portrait of him. Cate fully embodied the producer role, picking the songs for the album from a deep pile of demos, making arrangements for the chosen songs and steadfastly suggesting that the trusted team go off the beaten path in their execution. Alert to the scribble from which Tim’s songs emerge in best home-recorded intimacy, Cate’s studio production teases such details out without losing any of the cerebral splatter – deconstructing and rebuilding the songs with a tight-knit crew (comprised of drummer Stella Mogzawa, and engineer Samur Khouja).”

The WiNK will be available on September 16th via Drag City Records.