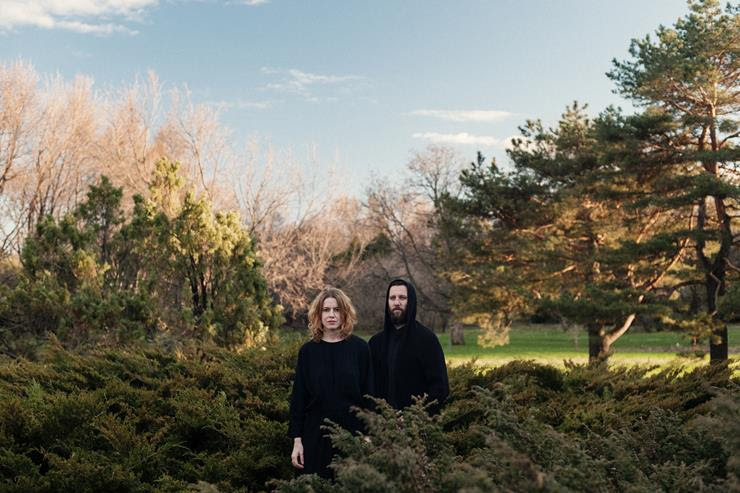 Today, Thus Owls premiere the single, “Turn Up The Volumes”. Of the song, the band explains: “We always heard this “swinging” cymbal in our minds when thinking of the arrangements for this tune and that’s how we ended up thinking of Liam O’Neill for the drums. His timber and tone was what we always imagined. This song is about standing fast in your choice and doing what you have to do even though it might be hard, and even though you have to leave some things behind. This song is indigo.”

“We never had a certain idea of what it should be more than a place with high ceilings for expression and room for development in any direction. So in it’s core Thus Owls is a creature that will always keep morphing.” – Erika Angell

Simon’s harshly charismatic guitar sound blends with the urgency of Erika’s vocals to create a sound that bends and stretches their compositions into ever newer and surprising shapes. Pop and folk song forms are refracted through lenses of free noise, punk-rock skronk, and jazz precision. Thus Owls borrows from every corner of popular music, while aiming to push boundaries beyond any hackneyed genre classification.
Erika explains it away: “Our personal reason for creating music, to write and record our own music, is always to try to make something that is as genuine, original and personal as possible. It’s not an easy task with so much amazing music already made and so many directions to choose between.” Her mild words and tone stand in contrast to the striking emotional soundscapes they produce.

In the earliest phase of the group, Thus Owls made use of the gaps in Simon’s near constant touring schedule and Erika’s multitude of projects to create two mesmerizing albums in Sweden (Cardiac Malformations in 2009 and Harbours in 2011). The band was always a labour of love and as such a natural priority, so when Erika relocated to Montreal in 2012, and Simon left Patrick Watson’s band, they began to focus full-time on Thus Owls. The duo secured a line-up that included some of their strongest collaborators from each of their communities (Montreal’s Stefan Schneider and Parker Shper, and Stockholm bassist Martin Höper, among others). Out of that swell of change, 2013’s Turning Rocks was made – and album that really reflects the focus and commitment of that moment.

It is in this constantly shifting scenery that Thus Owls finds their sound. The band is a vessel to hold the ever-changing inspirations it contains. In keeping with this spirit, the band has offered up a new EP called Black Matter, which goes back to the core in order to shake things up again.