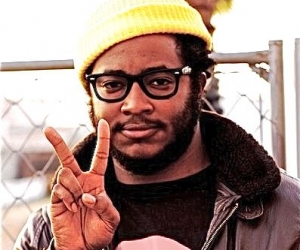 The analogue explorations of “Lotus & The Jondy,” the latest track from Thundercat’s new album Apocalypse, can be streamed above. Thundercat is also featured in the trailer for the debut episode of the new music show “Off Main St.”  http://dillygentandson.com/about.html The groundbreaking long-format show, produced by Dilly Gent (Nigel Godrich’s “From The Basement”), sees Thundercat taking the stage at an epic live show at the Echoplex in Los Angeles, and visiting some of his favorite hometown spots including Amoeba Records, Meltdown Comics and hatmaker Gunnar Fox. Look for the full episode to premiere later this month.

Forever a wildcat and wild card, Los Angeles’ Thundercat is impossible to tame artistically. His 2011 solo debut The Golden Age of Apocalypse, co-produced by Flying Lotus, created a genre-blurring enigma of indie rock and jazz, with a touch of electronica. On Apocalypse—out now digitally on Brainfeeder Records and via CD/LP on July 9—Thundercat brings a fusion of pop, soul, electronica, prog rock and funk into an unexplored dimension. He again pairs up with executive producer Flying Lotus to pull the veil back and reveal the simple truths of the cycle of life, for all its beauty and destruction. It’s an album about loss and rebuilding, trying to gain something back, and capturing that moment of clarity where one finally finds feet back on the ground again.