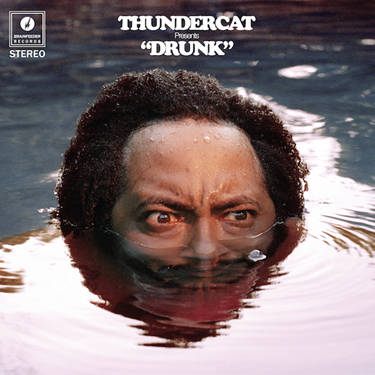 Thundercat has announced, his third album Drunk will be released on February 24th via Brainfeeder. “Drunk is a 23-track epic journey into the often hilarious, sometimes dark mind of the singer/bassist and finds a few of his friends joining him along the way including: Kendrick Lamar, Pharrell, Michael McDonald, Kenny Loggins, Wiz Khalifa, Kamasi Washington and Brainfeeder mastermind Flying Lotus.

“Show You The Way” is the first single from Drunk, and the ballad features two of Thundercat’s heroes: iconic musicians Kenny Loggins and Michael McDonald. And how did this collaboration come to be? Thundercat mentioned his love of Loggins several times during his press tour for The Beyond, leading to an introduction via his keyboard player Dennis Hamm. He tells Red Bull Music Academy Daily, “These are guys that I’ve listened to and where I felt that I’ve learned that honesty in the music. Kenny Loggins is one of my favorite songwriters.” Loggins was the one that suggested bringing McDonald in on the track and, Thundercat adds, “I think one of the most beautiful moments of it was realizing how amazing Michael McDonald was. He would go through so many ideas and have so much to offer.”

Thundercat also notes, “That song to me is about going down the rabbit hole, taking you to another place… On the edge of dark, there’s the brightest light. It means a lot to me in the sense of… the experience that I’ve had growing up with friends and people that I’ve been around where it’s inviting them into where I come from emotionally. Sometimes it’s a pretty intense thing. The point is how weird things can get. I feel like it’s very funny that, in a way, of course Michael McDonald and Kenny would be there.” “Show You The Way” is available to stream / purchase now. Hear it hear: http://spoti.fi/2j1rojD.

The album title, like the rest of the album, is meant to be both humorous and serious. “I’ve always tried to hold true to what Erykah Badu and Flying Lotus told me: It has to come from an honest place. I feel like it’s a place that I’ve been in different ways, seen different angles of and it’s been a bit inspirational, the drinking,” he tells RBMA Daily. “It has its ups and downs and everything, but I felt like it showed the human side of what goes on behind things, something that I see with all of my friends… I felt like it was kind of interweaved in the music culture. And it’s something that’s never talked about.”