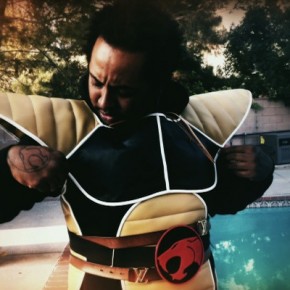 Bass-playing master THUNDERCAT announced his first headlining North American tour, set to kick off November 13 in San Francisco. He’ll be on the road in support of his massively praised latest album Apocalypse, out now on Brainfeeder Records and executive produced by beatmaster Flying Lotus. Thundercat aka Los Angeles’ Stephen Bruner is also set to make his late night television debut tonight as he sits in with The Roots on NBC’s Late Night with Jimmy Fallon. Look for an exclusive web performance from the show soon.

A diehard fan of comic books, cartoons and video games–as one might guess from a moniker like Thundercat–Bruner and pianist/composer Ruslan Sirota co-wrote and produced new track “Bowzer’s Ballad.” Dedicated to Hiroshi Yamauchi, the legendary late head of Nintendo, the track is available now via the Brainfeeder Soundcloud page as a free download. Notes Bruner, “What a great person, and great loss. Thank you for helping to fuel so many dreams. You will be missed. Sleep in peace.. and don’t come back as a zombie!”

Forever a wildcat and wild card, Los Angeles’ Thundercat is impossible to tame artistically. His 2011 solo debut The Golden Age of Apocalypse, co-produced by Flying Lotus, created a genre-blurring enigma of indie rock and jazz, with a touch of electronica. On Apocalypse Thundercat brings a fusion of pop, soul, electronica, prog rock and funk into an unexplored dimension. He again pairs up with executive producer Flying Lotus to pull the veil back and reveal the simple truths of the cycle of life, for all its beauty and destruction. It’s an album about loss and rebuilding, trying to gain something back, and capturing that moment of clarity where one finally finds feet back on the ground again.