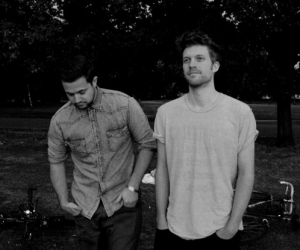 Sub Pop has signed UK band THUMPERS to their label, the band will release their debut album in North America in 2014. Comprised of long time friends Marcus Pepperell (vocals, guitar, keys) and John Hamson Jr. (drums, vocals, bass), THUMPERS make colourful, exuberant alt-pop that celebrates their innate musical kinship and draws upon their shared childhood memories. The London-based band combine layered androgynous vocals with muscular drums, astral synths and shimmering guitars in a celebration of the breathless sensations of youth and coming of age. Live, they are augmented by an interchanging cast of friends and musicians in faithfully bringing their immersive dynamics and grand scale sonic vision to the stage.

As a preview of what’s to come you can now listen to (as well as watch a lyric video) for THUMPERS single “Unkinder (A Tougher Love)”.  The song was recorded in their Warwickshire hometown where the duo decamp to write and produce all of their music. “Unkinder…” features additional vocals ‪from Marcus’ sisters – true to the band’s tight knitted collaborative vision – alongside and lush melodies to create their heady blend of modern pop. Though Pepperell and Hamson produce the majority of their music themselves, they recently began working with David Kosten (Bat for Lashes, Everything Everything) who lends his production and mixing skills to “Unkinder…”. The song is now available via iTunes.

THUMPERS will tour Europe this fall as direct support for Glaswegian-band Chvrches. The tour begins October 10th in Glasgow, UK at o2 ABC and ends on October 30th in Stockholm, SE at Debaser. Preceding the tour the band has a handful of dates to mention including October 8th in Dublin and October 9th in Belfast supporting Everything Everything. Please find a full list of dates below.