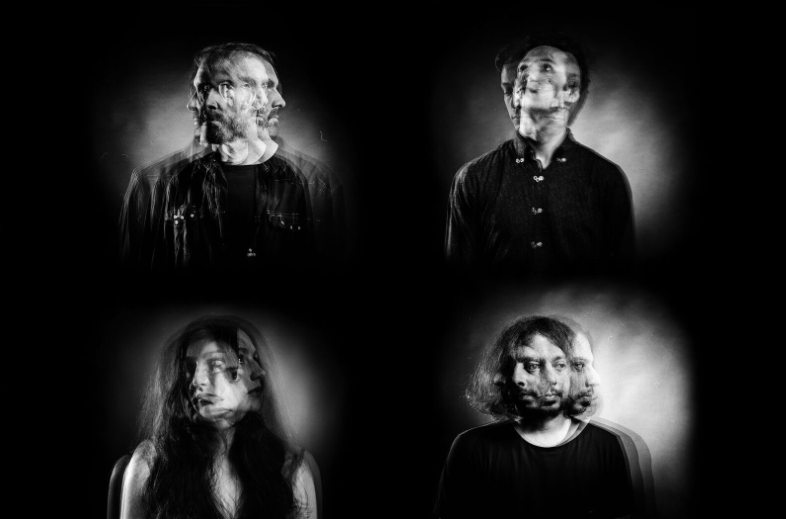 Thought Forms have announced their third full length release Songs About Drowning, Charlie Romijn(guitars / vocals), Deej Dhariwal (guitars / vocals) and Guy Metcalfe (drums) kick it up yet another notch, pushing the boat out even further to create a strange, intoxicating album, their most accomplished to date.

A contributing factor of this sea-change was the addition of Jim Barr, who as well as playing bass in both Get the Blessing and Portishead, also produced ‘Ghost Mountain’ and has been a strong ally of the band since they first toured with Portishead back in 2011. The resultant album is Thought Forms at their most refined, although that doesn’t mean that it lacks a pulse by any stretch of the imagination. Instead it’s the opposite – by combining songwriting methods they’d used in the past, they honed and sharpened their sound to a knife edge. The colossal, completely improvised opus “Aeaea” slowly builds into a maelstrom of beautifully attuned noise with piano, drums and even horns adding to its perfect storm. Similarly, “Forget My Name” and “By the Stars” build on improvised drum patterns to become beautifully hypnotic, seductive tour de forces which rank among the band’s best yet. With the band adding new instruments and a new level of confidence into the mix, ‘Songs About Drowning’ could well be the record that sees Thought Forms getting the recognition they so richly deserve as unparalleled British sonic noiseniks bar none, and see them carrying on the proud lineage of off-kilter noise pop, joining the ranks of My Bloody Valentine, Suicide and many more.