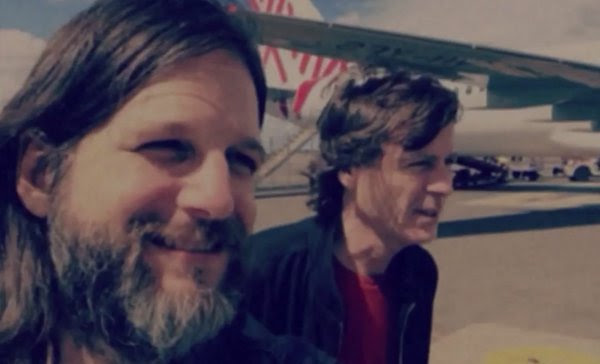 Those Pretty Wrongs shares the video for “Never Goodbye” today – the band plays its first show in LA tonight at The Echo. Jody Stephens, who is 1/2 of TPW, was also in Big Star and will be performing in SF and LA soon as part of the Big Star 3rd Live tribute performances – more info on those shows here.

Those Pretty Wrongs are Jody Stephens and Luther Russell, two old friends and veterans of the music scene in different ways.

Jody-as many people in rock and roll (and beyond) know-was the drummer for the legendary band Big Star. He went on to help run the equally legendary studio Ardent in Memphis and play with the endearing troop Golden Smog. Luther Russell was the leader of seminal roots-rock band The Freewheelers and went on to make several acclaimed solo records, as well as produce many important artists over the years. Together they have forged a sound that is brand new for both, yet begets a strangely familiar feeling…

It was the documentary Big Star: Nothing Can Hurt Me that brought Jody and Luther together creatively, when Jody asked Luther to join him for some promotional performances. A chemistry was immediately noticed. They began writing songs and performing them whenever possible, soon taking their name from the opening line of Shakespeare Sonnet 41, which they slipped into one of their first collaborations, “Fool Of Myself”. A relationship was soon struck up with underground SoCal label (and two-man revolution) Burger Records when the first track they cut in Memphis, “Lucky Guy”, was sent to Sean and Lee, who jumped at the chance to release it as a 7″, along with the aforementioned “Fool Of Myself” for the flip side. There was an outpouring of support for the new music, which gave Jody and Luther the confidence to move forward. Regarding how this all came together, Jody declares: “In a word…serendipity. So many of the events that brought Luther and me together were just by chance and born out of the Big Star world. I actually thought we might write three or four songs together for an EP but we just kept writing beyond that. ‘Another window opened up and through it’ we became Those Pretty Wrongs.”

Those Pretty Wrongs was tracked entirely to 2″ tape at Ardent in Memphis, using much of the old Big Star gear, including Jody’s original kit from Radio City and Third and Chris Bell’s acoustic and electric guitars from #1 Record. The album was mixed by Luther Russell and Jason Hiller at Hiller’s Electrosound Studios in Los Angeles, CA. Crucially, Jody is way out in front on this release-really for the first time ever-taking all lead vocals and co-writing all of the songs with Luther. The songs range from the elegiac “Lucky Guy”-which some have described as the boy from “Thirteen” all grown up-to the marimba-laced, circus-like “The Cube”. Soaring, heart-felt ballads like “Start Again” and “The Heart” mingle with songs with an almost Merseybeat-like combination of simplicity and complexity, such as “I’m For Love” and “Never Goodbye”-a number on which they went for a “busking in the train-station” quality with brushes on the snare and cascading 12-string acoustic guitar. As with all the songs, airy, light harmonies abound, making for a bittersweet sound all their own. Besides tunes with these more self-evident touchstones, there is the baroque rocker “Thrown Away”, mod-like jangler “Mystery Trip” and a moment of cinematic grandeur on the exotic, piano-driven “Empty City”.

Opener “Ordinary” is really the statement of purpose for the duo. Regarding the song, Luther says: “For me, the song has a message that is very timely in today’s age where everyone has to be ‘special’ and ‘different’. It says its okay to be ordinary. That’s a beautiful sentiment that Jody came up with…that the space between us all, that connection, is what is extraordinary.” With it’s shimmering, ascending/descending acoustics and sky-high clusters of harmonies, “Ordinary” was nearly the title-track to the LP, but they opted to self-title it, because it felt like the beginning of something. Through the words on this record Jody opens up about his life, which has been well-documented, but not in this very intimate way. Adds Stephens: “For me the lyrics are a walk through day-to-day emotions and experiences.”

Luther lives in Los Angeles and Jody in Memphis, so the commitment had to be strong to persevere in composing these songs and cutting them until they were completely satisfied. Those Pretty Wrongs will be released in May in a unique partnering between the classic Ardent label and the burgeoning Burger Records. No one could be happier than Jody and Luther, who feel that this keeps a family-like feeling to the release. “Why stop now”, remarks Luther. “We’ve wanted to keep this thing sounding and feeling personal from the start because it’s extremely personal for both of us.” Thus they’ve tailored every aspect of the project themselves: from producing, writing and playing much of the instrumentation to the design itself (Luther hand-draws the artwork). Those Pretty Wrongs is like a homespun arabesque with a pattern of many lyrical, melodic and harmonic lines to discover. Just like the handmade collage inside the LP, the record is akin to a series of snapshots: of lives present and past, and fleeting moments of simple joy and reflection.

“Those Pretty Wrongs is so much more than the two of us”, states Jody affectionately. “We were jump-started by friends who produced the Big Star documentary. Friends have helped book and play with us live and in the studio…not to mention providing the studios. Friends also provided accommodations and encouragement by coming out to hear the music. They have cared. We are grateful for them and hope to make more.”