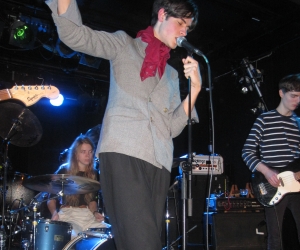 With the dissolution of his previous band S.C.U.M late last year, enigmatic frontman Thomas Cohen takes a step forward from the shadows with “Honeymoon”,  http://snd.sc/1geztJR the first taster of his solo endeavours. In doing so, he unveils something more lush, sumptuous and hypnotically compelling than anything we’ve heard from him previously.

Over the course of its 6 minutes plus running time, “Honeymoon” gradually and furtively unravels its nocturnal beauty, invoking the ghosts of Scott Walker and Lee Hazelwood in the process. Anguished horns embellish this slow burning tale of doomed love, creating a chamber pop gem that is as daringly and movingly widescreen as it is also emotively claustrophobic. It is a mesmerising and strikingly ambitious first step, and only hints at the sweep of romantic elegance and exquisite darkness that is to follow.