This Sound Will Save You Cover Kraftwerk 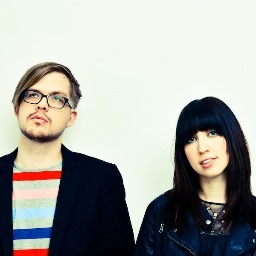 This Sound Will Save You blends unexpected electronic arrangements with epic pop adventures. Their live show has been described as “a musical fruit smoothie bursting with analog synthesizers, a unique voice, buzzy guitars and computer based loops drenched in catchy melodies and dance floor rhythms.” The band consists of vocalist/keyboardist/songwriter Chloe Jones, producer/multi-instrumentalist Matthew Fudge and live drummer Amber Jones. They offer something unique to the usual pop band or electronic DJ set by blurring the lines between the two and creating something that is both interesting and dynamic. Matthew switches between various instruments while programming loops and effects in real time. Chloe draws the audience in with her energetic performances while singing and playing multiple synthesizer parts.

Chloe and Matthew first met by chance when Chloe recorded a solo EP at a studio where he was employed. Matthew says, “I learned production as an assistant working with some of Canada’s most successful producers. After graduating from recording school, I was lucky enough to land a job where I was assisting the head engineer of a major recording studio that saw a lot of talented artists coming through its doors”. Chloe had moved from her hometown in Surrey, England to Halifax’s thriving artist community in the hopes of developing her music further. “I had just finished studying music in London and felt it would be helpful for my creative process to get out of my usual environment and be somewhere like Halifax.”