“There’s Nobody There” By Velvet Starlings

Los Angeles band Velvet Starlings, have returned with a new video for “There’s Nobody There.” The track is of their debut album Technicolour Shakedown which was released on vinyl this past February, “There’s Nobody There,” chronicles the isolation and loss of connection caused by the pandemic, the eerie ghostly vocal echo effects create an atmosphere that washes in the desperate feeling of emptiness of isolation.

“We shot the video for ‘There’s Nobody There’ at the height of the Covid-19 restrictions,” explains songwriter, recording wizard, singer, guitarist, keyboardist Christian Gisborne. “Half the scenes are videos of me and my guitar shot with my iPhone and a tripod at an abandoned park, under the freeway and in some empty bushes.” Technicolour Shakedown is the follow -up to 2019’s EP Love Everything, Love Everyone. Gisborne (who turned 19 in May) released his debut self-titled EP Velvet Starlings when he was 15.

Taking advantage of not only the cover of night but also the desolate environs that the quarantine afforded, they were able to capture the feeling of isolation perfectly. “We shot at 2am when there was quite literally ‘nobody there’,” he continues. “I think this song and video really captures the feeling of what it really was like during that era where we really didn’t know what was going on or where things would be in the coming months. The rest of the album has a very positive and outgoing sentiment however this track is rooted in the very real doom and gloom that was on our minds in late 2020.”

Originally released August 27, 2021, the youthful ’60s-infused garage rock ‘n’ roll band is gearing up for a busy 2022 with a slate of live shows and festival dates, including Redondo Beach, CA’s BeachLife Festival on May 13th where they share the stage with Weezer, 311, Black Pumas and Cold War Kids and McGill, NV’s Schellraiser Festival on June 5th alongside Broncho and Old 97’s before heading over to the UK for a round of dates later that month.

Hailing from Los Angeles and the beach cities of Southern California, Velvet Starlings has released a handful of EPs, singles and its debut album Technicolour Shakedown all before the band members could legally drink. Founded by Christian Gisborne (who incidentally tracked, engineered, mixed and produced their debut album). 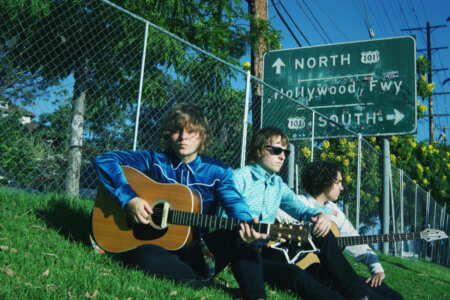 “She Said” By Velvet Starlings