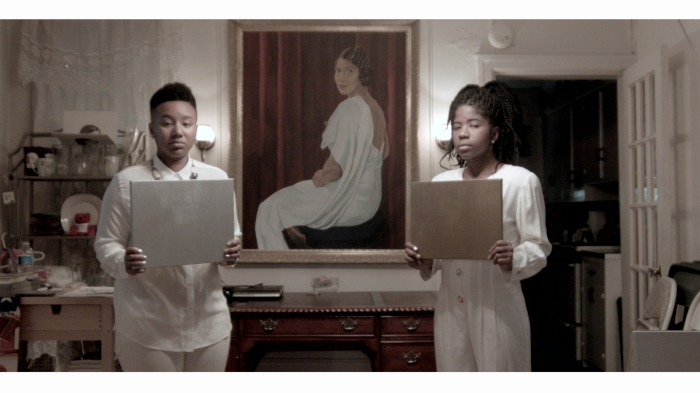 You can now watch THEESatisfaction’s official video for “Recognition,” the lead single from EarthEE, directed by filmmaker and visual artist Tiona McClodden.

Okay Player premiered the new visual and had this to say, “A statement of empowerment and act of divination that finds the duo standing in repose at the resting places and former residences of some of the most revered names in the African American artistic canon. Seeking to commune with the spirits of their forebears, THEESatisfaction visits the grave of Langston Hughes at the Schomburg Center in Harlem before passing through the Philadelphia homes of John Coltrane, Sun-Ra and Marian Anderson in a series of movements that combine with a mystic drum sequence to suggest the black magic traditions of trance and time travel.

“Packed with an impressive lineup of critical thinkers and creative disruptors, the video is capped by an appearance from Seattle-bred artist and designer Xenobia Bailey whose work was recently included in the acclaimed Funk, God, Jazz & Medicine: Black Radical Brooklyn exhibition at the Weeksville Heritage Center. Check the footage below to watch the official video for “Recognition (see video premiere Jan. 8th).”

THEESatisfaction has scheduled a few album release shows to mention at this time: Thursday February 26th in Seattle at Neumos; Saturday February 28th in Los Angeles at Jewel’s Catch One; And Friday March 6th in New York City at Santos Party House.

THEESatisfaction’s EarthEE, the follow up to awE naturalE, the alternative R&B group’s debut, will be available on CD / LP / DL February 23rd in Europe and February 24th in North America via Sub Pop and is led by highlights “Recognition,” “Nature’s Candy,” and the title track.

EarthEE was produced by THEESatisfaction and Erik Blood, mixed by Blood at Protect and Exalt Labs: A Black Space and mastered by Adam Straney at BreakPoint Mastering in Seattle. The album also features guest appearances from Shabazz Palaces, Meshell Ndegeocello, Porter Ray, Blood and Taylor Brown.