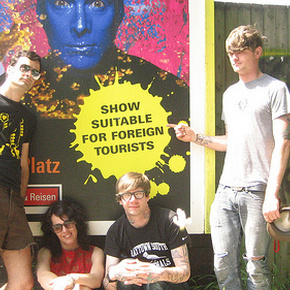 Thee Oh Sees have announced a batch of tout dates.

We all know the type:  Prolific bands who commit every loose thought, stray idea and 90-second song fragment to tape. Bands who pay no attention to little inconveniences like “release cycles” or “self-editing,” and instead decide that quantity equals quality, creating a discography more labyrinthine, imposing and – ultimately – exhausting than the cast of creatures in a sci-fi novel.

Chalk some of the band’s cunning chameleonic ability to John Dwyer’s 20-year resume.  The driving force behind such beloved and sonically disparate bands as Coachwhips and Pink and Brown, Dwyer’s increased fidelity to Thee Oh Sees and only Thee Oh Sees is evidence of a newfound sense of purpose and focus. Where once Dwyer used to funnel his divergent artistic ideas through a host of different channels, lately he’s been finding ways to make all of those impulses function within the framework of Thee Oh Sees — who have in turn grown closer and tighter and sharper with each eye-popping, jaw-dropping live show. As Dwyer puts it: “The family that plays together stays together.”