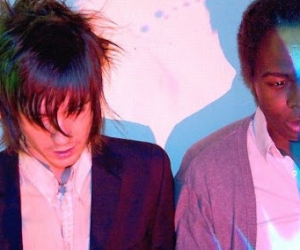 The Vivids formed in Long Beach, California (“…this drugged up beach-side town,” as sung in “Here Comes the Chain” from their first EP) in 2010. They play with an energy and focus that recall post-/art-punk touchstones like A Certain Ratio, The Names, Wall of Voodoo, Gun Club or Devo and the Talking Heads at their edgiest, while flirting with psychedelic guitar leads and the occasional surf warble.

The band are set to release their first UK single next month, in the form of the double A-side ‘AK-47’ / ‘Heir to a Void’. The record will be released via Psychic Healing Network (MYSTYRYS, Sarah Johns Music Party) on June 17th, available on 7″ single and digital download.