The Veils release video for “Axolotl” 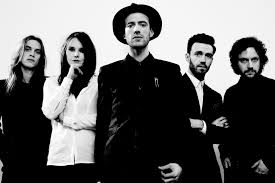 Filmed in New Zealand, frontman Finn Andrews says, “this was an extraordinarily fun video to make, I think because we got to shoot it back home in New Zealand with our dear friends director Tu Neill and producer Alex Gandar and pulling in favors from heaps of really great people. Art Director Sinclair Lonsdale was working in the art department for ‘Ash vs Evil Dead’ in the day, then coming and building these huge tentacle puppets for us at night. All the black goo coming out of everyone’s mouths was made out of the same stuff they put in mince and cheese pies just with black pigment in it. The day we filmed it, I spent the whole night just wandering around giggling to myself. It’s also probably the only time I’ll get to hear the sentence ‘Oil the tentacle, choke the jock. Action.’ Though you never know I guess.”

Later this year, The Veils will begin a worldwide tour that includes North American dates in DC, Los Angeles, San Francisco and Seattle. The month-long tour will begin on October 21st in Milan, Italy and wrap on November 25th in Brussels, Belgium.

The album reunites the band with producer Adam ‘Atom’ Greenspan, who’s work with producer Nick Launay has led to essential releases from Nick Cave & The Bad Seeds, Arcade Fire, Yeah Yeah Yeahs, Band Of Skulls and many others. Andrews and El-P (from Run The Jewels) met up in various locales to collaborate together. Over a two-year period, Total Depravity was recorded at Estúdios Sá da Bandeira in Portugal, Konk Studios in London, Casa Lynch in Los Angeles and El-P’s studio in Upstate New York.