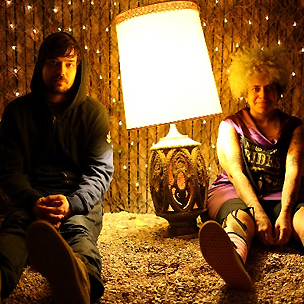 In support of The Uncluded’s U.S. Tour The Uncluded released a video earlier today which shows the inner workings of the duo’s live stage show on the road. The video serves as a portrait of the duo’s chemistry and presence on stage together.

The Uncluded are rapper Aesop Rock and singer-songwriter Kimya Dawson, and Hokey Fright is the duo’s first collaboration album; all 16 tracks were written, performed, and recorded entirely by Aesop and Kimya, except for one guest drum appearance by James McNew of Yo La Tengo on “Delicate Cycle. The duo head out next week on the third leg of their North American tour to support the release of Hokey Fright; see the completed itinerary below.