The Thermals Release Behind The Scenes Video 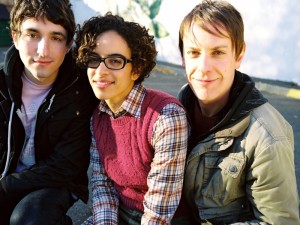 The Thermals have just released a behind the scenes video for “The Sunset” from the band’s new album Desperate Ground out now on Saddle Creek. For their latest video, “The Sunset”, Thermals bassist Kathy Foster took lessons from professional boxer Molly McConnell to prepare for her role as “The Boxer”. Kathy Foster says, “I loved learning from Molly, a world champion boxer with her own boxing gym. She gave me a two-hour lesson, and made it really fun and comfortable. It was hard work, I was tired after the first few minutes! But I think I did pretty good because we sparred a little at the end of it, which she said usually never happens in the first lesson. I felt so tough!” You can learn more about Molly McConnell and her boxing academy here. The official video for “The Sunset” premiered earlier this yearand is an obvious ode to classic boxing films such as “Rocky” and “Raging Bull”.  Much of the video is an homage to the opening credits of Spike Lee’s “Do The Right Thing”, with Foster channeling Rosie Perez.  “The Sunset” features many classic Portland, OR locales and was co-directed by Portland filmmaker Jeffrey Rowles and The Thermals themselves.

The Thermals have just announced several new shows in support of the critically acclaimed album Desperate Ground. The band plays later this week at Brooklyn Vegan’s Lollapallooza After Party and will perform at summer festivals including Omaha’s Maha Festival, Eugene’s Kaleidoscope Music Festival and Portland’s MusicFest NW. All US and European shows are listed below.

The Thermals’ sixth LP and debut for Saddle Creek was produced by John Agnello (Dinosaur Jr, Sonic Youth) in Hoboken, NJ. Agnello and The Thermals completed the record and evacuated the studio just hours before Hurricane Sandy ravaged New Jersey, a fate quite fitting when you consider the product. Desperate Ground is a true scrappy and scratchy return-to-form for The Thermals, with all the raw power and unhinged adolescent energy that made their early LP’s so insanely enjoyable.