The Teen Age Premiere “Why Would You Leave” 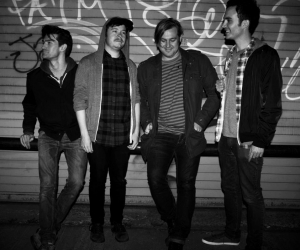 Brooklyn quartet, The Teen Age, have premiered one of two new b-sides, “Why Would You Leave”, today. The new single, “Matador”, is released today on PaperCup Music, and is available for purchase physically on 7″ vinyl and digitally. The Teen Age will perform during the CMJ Music Marathon in New York, October 16 @ Spike Hill, 8:30pm. Additional dates are in the works.

Formed in a Brooklyn basement in late 2012, The Teen Age plays a mix of 70’s inspired punk and garage rock. The group made their live debut in January of this year, supporting Palma Violets and released their debut single “Ventura”, recorded at Converse Rubber Tracks Studio in Williamsburg, Brooklyn in July. The track garnered an excellent response from such outlets as the MTV Buzzworthy blog. “Matador” and “Ventura” showcase the band’s particular brand of ‘”Doo Wop Garage” featuring crunchy guitars and a sing-along ready chorus, destined to have you dancing, while “Why Would You Leave”, provides another dimension – a pure adrenaline buzz-saw attack.