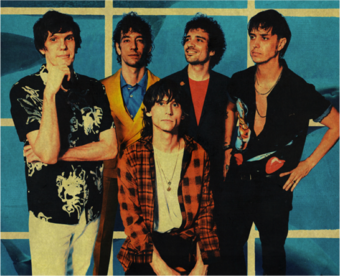 The Strokes have revealed their new full-length, The New Abnormal, will arrive on April 10, via Cult/RCA. The band debuted the first new song and Mike Burakoff-directed video, “At The Door,” during their performance at Senator Bernie Sanders’ University of New Hampshire rally last night. The band, who rang in the new year with a massive hometown show at New York’s Barclay’s Center, will hit the UK later this month for a very special show at London’s Roundhouse on February 19. The New Abnormal is The Strokes’ sixth studio album and was recorded at Shangri-La Studios in Malibu and produced by Rick Rubin. The album’s cover artwork is a painting by Jean-Michel Basquiat, Bird on Money.