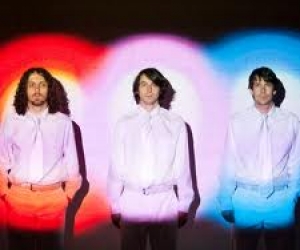 THE STEPKIDS will release the follow up to their self-titled 2011 breakout debut album this fall. Troubadour is set for release this fall on Stones Throw Records. Look for additional album details to be released in the coming weeks. They will also hit the road for shows including Bonnaroo Music & Arts Festival, a headline show at NYC’s Brooklyn Bowl and more.

The band also recently performed new album track “The Art of Forgetting” as part of the “In The Red Bull Studio” series, a new video series that features  artists performing songs from new and upcoming releases live from Red Bull Studio in Los Angeles. The video sees the band playing alongside eclectic geometric art installations that reflect psychedelic lighting that brings the song to life. In the accompanying interview, The Stepkids–Jeff Gitelman, Daniel Edinberg & Tim Walsh–discuss their forthcoming album, their deep roots in jazz music, performing live and more.

May 20 Minneapolis, MN – The Cowles Center