The Return Of Saturday looks Good To Me 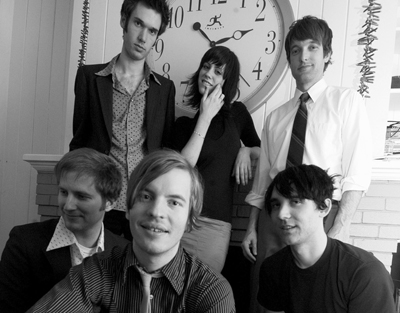 In their decade-plus existence, Saturday Looks Good To Me has never taken a typical path: endless line-up changes, shifts in sound from lo-fi 60’s pop to experimental noise rock, a twisting discography heavy on one-off singles and bizarre package tours with afrobeat and freakfolk bands.

In 2012, bandleader and songwriter Fred Thomas returned with a fresh new line-up, including new vocalists Carol Catherine and Amber Fellows, but also with old friends from previous SLGTM incarnations like bassist Scott DeRoche and drummer Ryan Howard showing up for the fun. The band’s fifth proper album, One Kiss Ends It All, came together following the group’s first tour after getting back in action, however the four years since their last full-length weren’t spent cultivating this new batch of songs. Instead, a spontaneous and breezy vibe flows through the album’s 12 selections, drawing on the reference points of 60’s pop and early indie rock, all filtered through the band’s skewed pop lens.

Saturday Looks Good To Me’s albums from the early 2000’s (All Your Summer Songs, Every Night) predicted the reverb-saturated production and girl-group revisitations that indie rock would embrace several years down the road. One Kiss Ends It Allexpands on those early lo-fi marvels and feels more like a revelation than a continuance. With more sophisticated arrangements and melodies more direct and engaging than anything the band has ever done, the album feels like re-telling the details of a dream minutes after waking. Something new colliding with something that shouldn’t make sense in a beautifully strange collage. And always more details hidden in the corners.