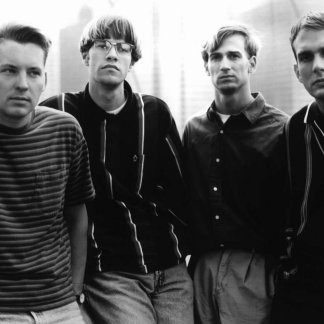 The Ocean Blue‘s debut record on the famed Sire Records label in 1989 achieved widespread acclaim and radio & MTV airplay. The band of four young high schoolers from Hershey, Pennsylvania went on to do two more well-received records for Sire, the atmospheric Cerulean and alt pop Beneath the Rhythm and Sound, and a fourth record for Mercury/PolyGram, See The Ocean Blue, before leaving the majors in the late 90s. The band did several independent releases in the 2000s and within the last several years began working on a new full length record, their first in over 10 years. That record, entitled Ultramarine, is scheduled for release March 19, 2013 on Korda Records, a new Minneapolis cooperative label that the band helped launch in late 2012.

It’s an interesting time for us to be putting out a new record. So much of the music we see and hear now reminds me of things I loved growing up,” say guitarist Oed Ronne. “My friends in their twenties like The Smiths and New Order. It’s a strange thing, but good for us I think. We’d love to reconnect with our old fans, but also make new ones among the ranks of the young.”

“I’m really looking forward to sharing this new music with people who know us and people who’ve never heard us before. And play some shows,” says bass player Bobby Mittan. “It’s been way too long.”