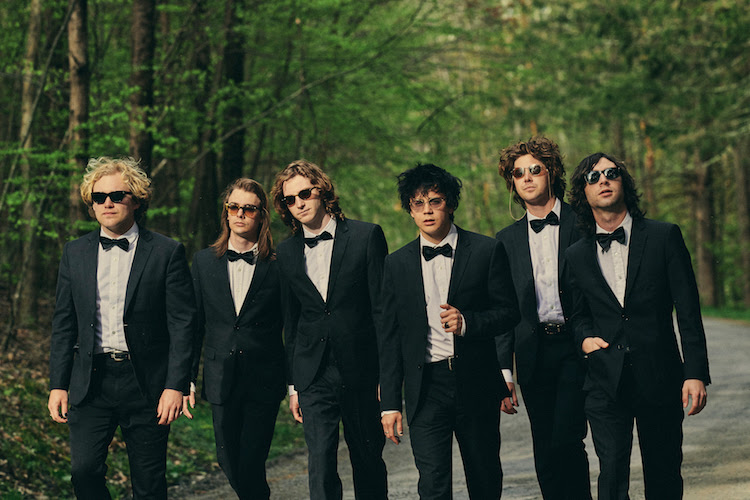 The Nude Party will release their new album Midnight Manor, on October 2nd via New West Records (Ron Gallo, The Delta Spirit). The full-length was mixed by John Agnello (Dinosaur Jr., Kurt Vile). Midnight Manor is the follow up to their self-titled debut. Touring mates and Fans of the band include Jack White and the Arctic Monkeys.

Today, the band have shared the video for the song “Lonely Heather.” Frontman Patton Magee said, “The video is inspired by Ralph Bakshi’s New York street animation style, in movies like American Pop, Streetfight, and Heavy Traffic. During the peak of the pandemic, our photographer friends Bryan Derballa and George Etheredge took a series of incredible photographs around New York City. We used those deserted street corners and venue shots as the backdrop for the rotoscope animation. Then filmed all the action on a green screen in our barn during quarantine in April. Brooklyn-based director and animator Parker Worthington painstakingly put together all the footage and photographs into this weird dream version of New York.” Of the song, Magee said “Heather is the constant object of unwanted affection, the solitary queen of rejection. She follows the scent of her whims and can’t be bothered by the desires of anyone.”

The Nude Party formed while the members were students at North Carolina’s Appalachian State University. After honing their chops through incessant practice at their communal band house, they relocated to a property tucked away deep in the Catskills where they have lived and labored (literally—they earn their keep gardening, tending to animals and doing all manner of general groundskeeping) for the past several years. And it’s where they worked up the songs that populate and inspire the title of the new Midnight Manor.

Like most young bands suddenly thrust into a relentless touring schedule, in the two years since the release of their debut, the Nude Party experienced their fair share of stress, pressure, internal dynamics and personal turmoil. They had no creative outlet for all of it until they finally got down to writing again, which was a release of that built-up tension. Several members went through serious breakups during the album’s creation as well. The experience eventually brought the band closer together and the songs reflect that process. Magee says, “If I had to think about a long-term goal for this band, it would be to just exist, and exist in a purposeful way.” He continues, “And in 10, 20 years? I want to be onstage and still be surrounded by my friends. So we’ll just continue to do what we know how to do, and what we love to do. I know that’s easier said than done”—to quote the title of a rollicking, raucous Midnight Manor track— “but that’s what’s important to us.”