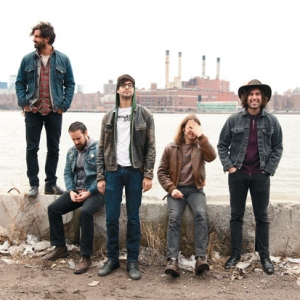 With just over a month since the release of their last EP, The Men are ready to announce their newest full-length record, Tomorrow’s Hits. Set for release on March 4th via Sacred Bones, the album is the latest entry in the band’s rapidly growing discography. The band is  heading out on the road in 2014.

After spending much of 2011 and 2012 on the road, including a trip upstate to write and record New Moon, their fourth full-length in as many years, The Men needed a break. They decided to take the winter of 2012 off to work on new material in Brooklyn. All that time spent on tour meant the band had no practice space, so founding member Mark Perro offered to turn his bedroom into one. All the furniture except the bed was moved out, and the band’s gear was moved in — drums, pianos, a dozen or so guitars, and amplifiers. They practiced in that bedroom in Bushwick nearly every day for three months, writing new songs and cutting more than 40 demos.

By the end of that winter, the Men had pared that crop of songs down to 13. With their plans to take a break foiled by their own work ethic, they decided to record those songs before New Moon came out. They booked two days at Brooklyn’s Strange Weather studios, clocked in, and tracked all 13 songs entirely live. A horn section stopped by as well, contributing to two songs and playing live right along with the band.

Eight songs from those sessions made the final cut for The Men’s new LP for Sacred Bones, the tongue-in-cheek-but-still-auspiciously-titled Tomorrow’s Hits. This is their first album recorded in a high-end studio and, appropriately, the result is their highest fidelity album to date.