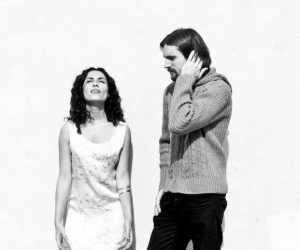 The Mast have announced their upcoming release of their full-length Pleasure Island, out January 28th, 2014 on Channel A Records. As a preview of what’s to come from the Mast, the Brooklyn-based duo have released their video for Pleasure Island track “UpUpUp.” The visually arresting clip, which features world-renowned dancer Pandora Marie, was directed and edited entirely by singer Haleh Gafori.

Eschewing the traditional instrumentation used on their debut Wild Poppies, Haleh and beatsmith/percussionist Matt Kilmer created the blueprints for Pleasure Island on planes and between gigs and recordings sessions for various projects in their hometown of Brooklyn and overseas.  Over the past year, while composing music and recording for Louis CK‘s show Louie on FX and working with artists as diverse as Reggie Watts and new music cello pioneer Maya Beiser, Matt always had his laptop in tow and was consistently sending tracks to Haleh. Between directing or editing music videos and darting off to cities as far as Assisi, Italy to recite her poetry, Haleh would write lyrics, record melodies, tweak arrangements, and send the tracks back to Matt.  Through this volleying of ideas, Pleasure Island was born.

The dance floor banger “Breathless We Go” follows, leading us into the mysterious cave of “Voices” which like many of the songs on the album features found sounds, in this case the swoosh of windsurfing as well as percussion samples Matt collected during his years of traveling.  Continuing in this vein, the impressive beast of a song “Nuclear Dragon” features an African balafon deftly played by Matt and “Lean Into It” opens with a sample of Pygmy water drumming from the Congo.

In their live shows, where they have performed alongside Blonde Redhead, Reggie Watts, Teebs, Susanne Sundfør & more, Matt and Haleh incorporate live electronics, percussion, and vocal improvisation, preserving the spontaneity they cultivated as instrumentalists. Speaking on their live show, Haleh said “We know we’ve succeeded when our audience is sweating by the end of the show.  When we see them jumping and moving, we know they’ve had a good time.”

12. Seas Across Your Mind