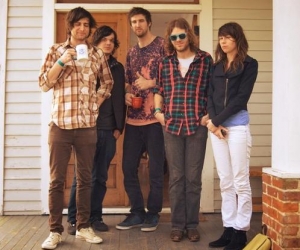 Today, The Love Language announce the release of Black Mt. Demos, a collection of outtakes and early versions of songs that appear on their latest album, Ruby Red. Originally released as a bonus cassette only, Black Mt. Demos is now available to purchase digitally at most outlets, including the Merge store.

Of Black Mt. Demos and the process of recording Ruby Red, Stuart McLamb writes: “I wanted Ruby Red to have a different feel from my previous record. I labor and obsess over song structure, and production is just as important as the songs themselves. I always battle with whether or not I want the raw feel of the demos to be the final product. With the Black Mountain sessions, I feel like the songs coexist with the record, devil on the right shoulder to Ruby Red’s angel on the left.”