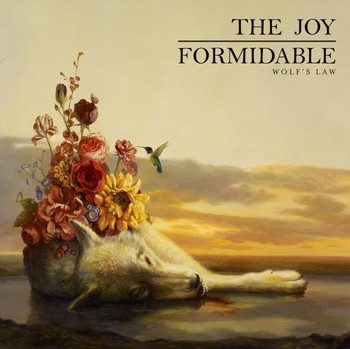 As soon as Wolf’s Law, the sophomore release by The Joy Formidable, wafts in its evident the Welsh trio have taken their anthemic noise-pop to another level. Cinematic strings swoon and create a grandiose tapestry for the band’s second record to roll out across. The orchestral flourishes side step eventually, queuing up the now infamous barrage of building-leveling drums, gargantuan riffs and pulverizing basslines that makes up album opener ‘The Ladder Is Ours’. Widescreen and full bodied is one way of summing up The Joy Formidable, if The Big Roar, the band’s debut, hinted at a band adapt at creating melodious walls of noise, Wolf’s Law takes that notion and play’s it out in another dimension.

There is a certain direct sucker punch feel with the Welsh band’s latest release, their debut at times meandered and was occasionally swathed it too much shoegaze fuzz, where as this time, The Joy Formidable have carved out an album that is succinct and one that doesn’t hide behind layers of reverb. Wolf’s Law portrays a very confident sounding Joy Formidable, Ritzy Bryan’s vocals are pin drop clear while her fretwork is at times savage, then you have the thunderous drumming of Matt Thomas and finally Rhydian Dafydd’s basslines sounding utterly elastic, as heard on the intro to ‘Little Blimp’

The Joy Formidable maybe the three axis of skyscraping noise, ‘Bats’ and ‘Forest Serenade’ illustrate this perfectly, however Ritzy and Co sound as enthralling when either paired down or channeling a dreamy aesthetic. ‘Silent Treatment’ is a fine example of the former, which finds our frontwoman cooing over two acoustic guitars that intertwine like a spiraling sycamore seed caught on a cool breeze. Equally ‘The Turnaround’, the record’s poignant finale, strips away the bombast and allows strings to carry Ritzy’s vocals aloft as if they are being transported to the heavens via a cloud. But it’s still utterly mesmerizing when the trio cut loose, especially when ‘Maw Maw Song’ takes the eccentric slant of Muse with the song’s title being chirped during its chorus (ironically the Devon band are former touring partners of The Joy Formidable), then a storm is whipped up by persistent drumming and the kind of fret manipulation that Matt Bellamy would be proud of.

It may be Wolf’s Law but really The Joy Formidable’s new body of work should be the law of the land.