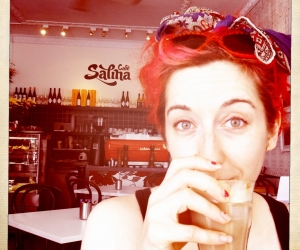 Canadian-born, NYC-based songstress Kim Boekbinder performs under the moniker The Impossible Girl, crafting lush, genre-defying songs that fuse elements of electronic and acoustic music.  A performer, composer, and visual artist, Boekbinder made headlines in 2010 when she successfully funded her debut LP via Kickstarter and went on to pre-sell her US tour using the fundraising platform. The Impossible Girl is back with her second fan-funded solo album, The Sky Is Calling, a celebration of humans in space. Produced by Joel Hamilton (The Black Keys, Tom Waits, Pretty Lights), the cosmic album will be released on June 21st