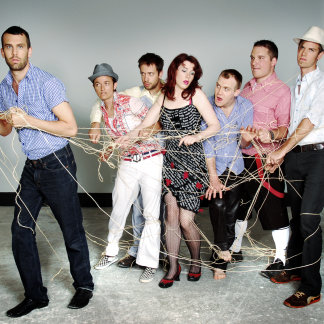 The Hidden Cameras, led by songwriter Joel Gibb, have announced their sixth full-length album, AGE, due on January 21 via Evil Evil/Motor Music. The eight-song collection is the band’s first since 2009’s Origin:Orphan. First single, “Gay Goth Scene”, takes on the battle of bullying and ostracizing of teenagers who are made to feel different by family or schoolmates, with vigorous pop arrangements. Recorded by Ohad Benchetrit (Do Make Say Think/Broken Social Scene) and mixed by Howie Beck (Feist/Hayden), the band premiered an award-winning video for the track, directed by Kai Stänicke, in October. With AGE, Gibb proves himself to be an increasingly diverse and eclectic songwriter.