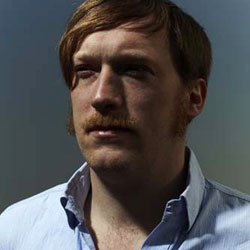 On September 30th The Field will be releasing his fourth studio album Cupid’s Head, his first solo recording since his debut From Here We Go Sublime, and the first one made using only hardware, no computers. The album explores a darker and slower pace than what we’ve become used to when it comes to The Field, taking influences from his various side projects such as Loops Of Your Heart and Black Fog, a shift made immediately evident by the change of colour of his signature artwork, now in black on black.

That isn’t to say there aren’t things to be recognised, his fondness for the loop still at its core, and the title track in particular carrying that trademark “fieldish” sound, but managing the difficult task of taking these different influences and produce an album that’s sounds both new and familiar at once. In Willner’s own words;

“When I started to work on “Cupid’s Head“ it was quite awkward. I felt that I had nothing to put into a new album and I´m not the type to sit down and force something out in the studio.…/…But then, after a few modest attempts, I got a first loop together and running which turned out (in a short time) to be “No.No…“. It was a revelation of sorts as making it felt new to me, and different, and that’s when it all came out.”