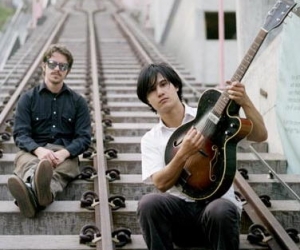 San Francisco natives The Dodos, have announced their fifth full-length, Carrier, will arrive in stores via Dine Alone Records on August 27. The album will be released on CD, LP (180 gram blue vinyl), cassette (limited edition of 100 white cassettes) and all digital outlets. iTunes pre-order will begin June 4 with an instant download of the first single “Confidence”, which is available to stream via Pitchfork – repost via Soundcloud.

The Dodos, comprised of singer and guitarist Meric Long and drummer Logan Kroeber, are also heading out on a full North American tour following the release of Carrier. Dates will be announced in the coming weeks.

When it came time for The Dodos to begin writing their fifth LP, Carrier, singer/guitarist Meric Long wanted to start over. The uncertainty of the band’s trajectory as well as the unexpected passing of guitarist Chris Reimer (formerly of Women) brought about a reassessment of things within the band, and in particular Long’s songwriting.

“Chris was a huge influence on the way I think about guitar, songwriting, and music in general,” reveals Long. “Seeing how he could transform and shape sound with an electric guitar inspired me to explore more tones and use those tones to begin writing a song.”

In need of a different vantage point, Long began writing words before music for the first time, enveloping himself in silence rather than sound. When it came time to set these lyrics to music, Long started writing with only his electric guitar in hand — another first. The focus on this instrument was due in large part to the time Long spent with Reimer. And so, when he began to formulate the tracks that would ultimately comprise Carrier, Long employed two principles he inherited from Reimer: patience to let a song develop and a judgment-free enthusiasm for sound.

The album was recorded in the band’s hometown of San Francisco, allowing for less time constraints and a more pressure-free experience than past out-of-state sessions had afforded. Although John Vanderslice’s Tiny Telephone studio was initially selected for its analog-friendly set-up, the duo were happy to find themselves working within a supportive community of like-minded musicians that included engineers Jay and Ian Pellicci, both of whom assisted in the production of Carrier, as well as the Magik Magik Orchestra, which appears on several tracks.