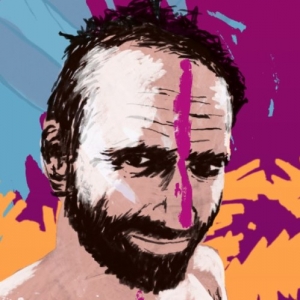 The Dissolve has premiered the trailer for Nik Fackler’s second feature film Sick Birds Die Easy which will be released on February 11. The movie was filmed on location in Gabon, Africa. Fackler gave each cast member (all close friends of the director, but with strikingly opposing personalities) a different kind of Camera and set them loose in the jungle. Fackler attempted to guide the resulting chaos with an intent to create a final chapter of the biblical bible by asking the question: after the apocalypse, will humanity return to Eden? What started as an attempt to make art, quickly became very real and dangerous for the cast and crew, but inevitably resulted in the answer to the Fackler’s question.

Exploring the worlds of white privilege, magical realism and the apocalypse, Director Nik Fackler takes a drug addled conspiracy theorist, an entitled love drunk musician, and an American film crew deep into the jungles of Western Africa, searching for Iboga, an extremely potent psychedelic plant said to have the ability to heal drug addiction. What initially begins as a trip towards enlightenment, becomes a desperate attempt at maintaining sanity.

With a mad mix of compellingly hilarious characters, experimental drug use and an array of expertly wielded lo-fi and hi-fi cameras. Fackler capably explodes the fiction / non-fiction divide with an alarming self consciousness and ever more surprising degree of sincerity. Delving into mysticism, politics, colonialism and human nature, Sick Birds Die Easy is a mind bending, fantastical social experiment that will leave you laughing and questioning your own understanding of reality.

While on location and filming in Africa for the documentary Sick Birds Die Easy, Sam Martin (Capgun Coup) wrote music inspired by what we he learned and experienced while living at Ebando village with Anarchist Bwitist. Bwiti is an ancient form of spirituality used by the Babongo, Mitsogo, and Fang tribes who use the psychedelic and dissociative root bark Iboga for their right of passage and initiation ceremonies. Sam Martin wrote over 31 original pieces of music and score for the film, all of which are used in the film and will be released as a separate soundtrack along side it. The music ranges from psychedelic score pieces set against the backdrop of ancient jungle and cosmic landscapes to intimate basement recordings that are reminiscent of Velvet Underground or early genre-twisting sounds found in the original post punk era. Impose premiered “Morbid Masters” from the Sick Birds Die Easy soundtrack and it is also available to stream via SoundCloud.

About the Director:
Born and currently living in Omaha, NE, Fackler made his screen writing and directorial debut with the feature film Lovely, Still, starring Oscar winners Ellen Burstyn and Martin Landau. The 2008 release received critical praise for its artful direction and powerful performances and earned Fackler an Independent Spirit Award Nomination.

Fackler’s career began as a teenager directing short films and music videos for bands such as Bright Eyes, Sia, Azure Ray and Cursive. He was quickly noticed and found himself directed his first features at 23. His most recent music videos have been for his own band, Icky Blossoms, who released their debut album in 2012 on Saddle Creek Records.

For his sophomore feature, Sick Birds Die Easy, Fackler experimented with genre bending and magical realism in the jungles of Africa creating an experimental documentary based around hallucinogenic tourism, white privilege and ancient religions.