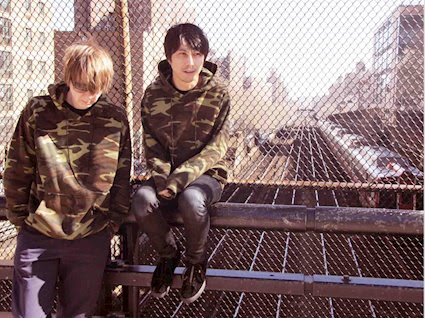 Two producers. one Japanese and one Russian have put their minds together to release their debut offering as The Dayoffs. self-titled full-length will appeal to fans of Teenage Fanclub, The Boo Radleys, Ash, Ultra Vivid Scene, and PUNK TV, which Dayoffs’ own Vladimir Komarov himself had founded.

The Dayoffs are Vladimir Komarov and Atsuo Matsumoto. They met in studio while working on other artists’ output. Always busy working on other people’s music, Vladimir and Atsuo recorded some instrumental improvisations during studio downtime, gathering enough material for a debut LP. Hence, their name The Dayoffs – from constant lack of studio time for their own music.

The Dayoffs is a rock duo with an elastic, transparent and multilayered sound and catchy riffs and hooks due to some solid pop sensibilities. ‘Love Love Love’ is a prime example of this, oscillating between winning elements of Teenage Fanclub, Ash, The Boo Radleys, Ultra Vivid Scene and Pet Shop Boys. Slated for release on November 10 via German boutique label Emerald & Doreen Recordings, their debut offering is comprised of 11 tracks.

Coming to their praise immediately was James Atkin of EMF fame. “I’ve been so looking forward to this musical offering from The Dayoffs, having followed their progress from the fruition of this new project. The track ‘Next To Nothing’ ticks so many boxes for me from the off. Opening with a low-tech acid synthesizer that tells you something serious is going down and to hold on tight for the ride. The distorted bass makes you actually feel dirty with the drums pounding like a sweaty amphetamine episode.”

“I’ve always been a fan of Vladimir’s vocal delivery, weaving non-committal but with acute emotional conviction. I love the way the guitars crash into the chorus, creating beautiful textures and dynamic highs. These guys have seriously got their song writing and production skills nailed, Vladimir and Atsuo have created a truly stunning album that will no doubtable be on everyone’s turntables by the end of the year.”

The new video for ‘Next to Nothing’ presents clips of skiers from yesteryear, a DIY style that pays homage to American punk, skate, and snowboard videos of the 90s. In contrast, the videos for earlier tracks ‘Love Love Love’ and ‘State of Madness’ focus on the duo, their life and environment in New York City, the latter even filmed by prominent Russian movie director Fedor Lyass.

Atsuo is Japanese and Vladimir is Russian. Despite living in different parts of Manhattan and supporting opposing soccer teams, these two have much in common. Not only are they born on the same day, but they are both musicians and recording professionals. The two met in 2012 at the legendary Stratosphere Sound Studios, when Vladimir was tracking for a project and Atsuo was engineering the sessions. During the first recording hour both realized that their recording methods and musical tastes are similar. Soon they teamed up to produce a bunch of records, including the debut album ‘Country Mile’ by James Atkin (EMF) and ‘Voshod’ by Russian post-punk band Manicure.

Vladimir Komarov is a musician, sound producer, DJ, and journalist and otherwise known as a pioneer of Russian shoegaze and indietronica. While his Russian music projects Hot Zex and Punk TV became staples of the nascent Russian indie rock scene, they were also were well-received abroad. Atsuo Matsumoto is a Japanese musician and sound engineer and, apart from The Dayoffs, he is a member of Andy Chase’s Camera2 band.

“This is a rock album. Speedy, noisy but lyrical – as guitar as could be. We did this on purpose. It was like playing with old toys – sweet, nostalgic and big fun. Maybe too sweet sometimes – but I don’t mind. These songs came out of nowhere, uncalculated and with a lot of improvisation,” explains Vladimir Komarov. “It took us more than two years to complete this 30-minute record as we are perfectionists. Every time I listen to it, I have nothing I’d like to add. This means that it is off the table and I’m very excited to know that our next record will follow different direction”.

The Dayoffs debut LP will be made available across all the regular digital sales and streaming platforms.