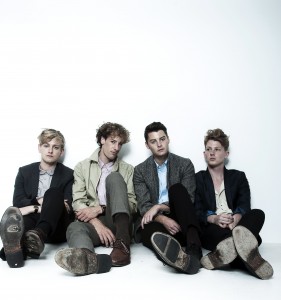 Sheffield, England quartet The Crookes have premiered a new track, “Dance In Colour”, today. “Dance In Colour” is featured as a bonus track on the U.S. version of Hold Fast, their already acclaimed at home full-length, available here October 1 on Modern Outsider. The Crookes made their U.S. debut at this year’s SXSW Music Conference wowing the folks at Modern Outsider with their energetic live performances. The Crookes will bring that youthful vigor to New York in advance of Hold Fast‘s arrival in stores, September 17 at Bowery Electric and 19 at Union Hall.

Influenced by the optimism of early Beatles with the melancholy of The Smiths, The Crookes tap into 50 years of British pop for their sounds, and 100 years of British social history for their words – four English literature graduates whose music is bound with storytelling and tinged with nostalgia.