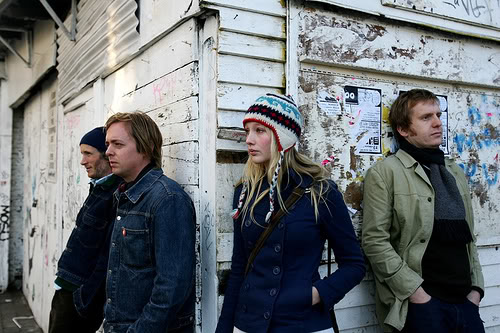 released in 2005, The Clientele recorded Strange Geometry with producer Brian O’Shaughnessy at Bark Studios, Walthamstow (UK). The album features twelve dreamy folk-pop songs with shimmering psych guitars and string arrangements by Louis Philippe. On May 6, the album will be re-pressed on vinyl and include a download of the entire record plus six previously unreleased bonus tracks. The Clientele has shared “Since We Last Spoke” Listen to and share below.

Strange Geometry was the first Clientele album to be recorded in a fully equipped, professional studio with an established engineer/producer. When not concerned with the chore of production—the twisting of knobs and the repair of faulty equipment—the band was free to focus completely on the music, achieving and expanding upon the sonic blueprint they had envisioned from the start.

The Clientele singer-songwriter Alasdair MacLean wrote of the bonus material:

All six of these tracks are outtakes from the July 2005 Strange Geometry sessions at Bark Studios in London. “Breathe In Now” is one of my favourite Clientele songs. I wanted it to have a baroque string arrangement but there was no time to put one together, so it was dropped. “Spanish Night” was written in Valencia. It was too hot to sleep at night, so I ended up staying up at night and sleeping all day, when, as it turned out, it was too hot to sleep. “Since We Last Spoke” was abandoned halfway through for reasons now unclear, though I still like the lyrical image of Nero appearing in a crowd. Apparently, Emperor Nero mixed among crowds in disguise, listening to other people’s conversations. “One Hundred Leaves” was a fan favourite and used to be a staple of our live shows, but we couldn’t quite get the live feel down on tape at Bark. “When I Came Through” is a fragment, forgotten until now, a dream of walking home from the railway station to the garden.

Strange Geometry:
Since K Got Over Me
(I Can’t Seem to) Make You Mine
My Own Face Inside the Trees
K
E.M.P.T.Y.
When I Came Home From the Party
Geometry of Lawns
Spirit
Impossible
Step Into the Light
Losing Haringey
Six of Spades

A Sense of Falling: Strange Geometry Outtakes:
Breathe In Now
Losing Haringey (Instrumental)
One Hundred Leaves
Since We Last Spoke
Spanish Night
When I Came Through