The Clientele debut “Everyone You Meet” video 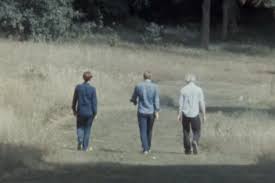 The Clientele, have released a new video for “Everyone You Meet”. The track is off their album Music for the Age of Miracles, out September 22 in North America via Merge. The clip, finds the London trio crisscrossing through their hometown streets and parks on filter-free, real-deal film.

Director Paul Kelly on the film format of choice:

I still have the original Super 8 cameras that I used when I first began shooting music promos in the 1980s, although I had no idea if they still worked and, as we didn’t have the time or budget to get them serviced, just took a chance and hoped for the best.

Apart from its aesthetic charm, the original reason I began shooting on Super 8 was its (then) low cost, but with digital filming now effectively free, Super 8 seems quite an exotic choice. It is not cheap, and the sound of the camera motor is a constant reminder of the cash running through the shutter. There are various filters and effects that can mimic a filmic look, but there is no substitute for the real thing.

Having shot all ten film cartridges, there was a slightly anxious two-week wait to see if anything had actually come out, and with the deadline looming, I began to form a digital back-up plan just in case! I still get a sense of amazement whenever I see film rushes; it seems miraculous that the process actually works at all.

We knew Paul had filmed the Lea Valley in [Saint Etienne’s short film] What Have You Done Today Mervyn Day? and that he was interested in forgotten parts of London. We asked him to make the North Circular ring road and the buildings and streets around our way—New Southgate, N11—look beautiful. Which, amazingly, he did. He captured the North Circular vernacular and hung out with us in some of our favourite places, beginning with a couple of epic walks along the A406 ring road in the pouring rain.

The Clientele return to North America for their first shows since 2014. Check out the full list of dates below and get your tickets today!