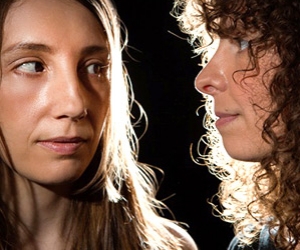 Today The Blow shares “From The Future,” the second single from the new self-titled LP that drops on Oct. 1 on Kanine, wherein Khaela Maricich has a rather deep conversation with the moon. You can listen to the previous single, “Make It Up” here.  The Blow has a full North American tour scheduled for Oct. / Nov. – a full list of dates is below.

More about the new album from The Blow:

It’s funny, trying to find words to describe music, isn’t it, because the point of music is that it’s something other than words. Music, at its best, is something better, hanging out in a mystery dimension with its cool friends, sex and drugs, each of them outdoing each other with their refusal to be reduced into sentences. But we will try to describe it anyways.

The Blow is Khaela Maricich and Melissa Dyne. We made a new Blow album, called The Blow. It happened like this: we met in Portland in 2004, hooked up in 2006, started itching for new surroundings and moved to New York City in 2008. Around that time we started performing together live as The Blow, with Khaela onstage and Melissa working from behind the audience, manipulating the visual and aural elements. After a few years of swapping ideas and watching them grow and breed new ones, we decided, “Fuck it, why not record a record together?” So we went together into the wordless realm and were there for a couple of years, fusing together the landscape of sounds and samples and waves and sensations that make up The Blow.

The sonic field is a endless grid of possibilities. Using electronic instruments makes the options even more limitless. The record collection on the shelves in our living room reflects some of the beacons that illuminated our way. It’s stacked with art rock heroes, new wave romantics, R&B thumpers, and radio pop. (It might be said that we are fairly poor imitators, moving around in the dark and inventing weird new shapes.) We divided the tasks of making the album between us pretty much according the the differences in how we dream at night. Khaela dreams about people and conversations and juxtaposed feelings: she wrote the lyrics and melodies and many of the compositions. Melissa dreams of being a beam of light bouncing off a Ferrari: anything that gave the songs dimension (arrangement, engineering, synth programming, sample perfecting, half of the composing) was done by her.

A lot of the sounds that we used in the album are samples of acoustic instruments that we processed back into electronic elements. We produced this album ourselves in and and around New York City, and we would travel around with our portable rig, sampling performances from friends and acquaintances, running our sounds through other peoples gear like taking it to an audio spa. What we didn’t have we borrowed or found, what we didn’t know how to do we learned. Making this album was an odyssey of experimentation. These songs trace the arc of our somersault into the unknown, holding hands, going backwards through the air, watching to see where we land.