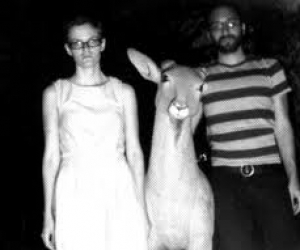 In the thick of a sweat-soaked, sun burnt Floridian summer, West Palm Beach’s the band in Heaven have finished their debut full-length record, Caught in a Summer Swell, slated for release on Decades Records, a boutique South Florida label. They will also release the album on cassette with Cheap Miami.

On first listen it is apparent they’ve made a distinct departure from their previous releases, no longer hiding behind curtains of reverb and feedback. Casting aside their guttural shoegaze foundation, they instead meet us with an overall dreamy sound. Sometimes spacey, sometimes catchy, other times noisy, the band in Heaven now holds our attention with a tighter, stronger rhythm section which is then glazed over with a sheen of dreamy, delayed guitars. Male / female vocals trade off throughout the album.The lyrics aren’t hidden, but nothing is on the surface.

The themes within the record have reveal a sense of maturation as well. With topics that touch on growing pains, family debt, loss of innocence, wistfulness, giving up and letting go, the listener is left with a more deep-seeded sense of both hope and loss.  On the opening track, the band in Heaven references Ray Bradbury in their perfect summer tune “Dandelion Wine” with the line: “Kiss your wrist and ask no one the time / stay up late getting drunk off that Dandelion Wine,” making strong declarations on the timeslessness of youth contrasted with the inevitability of aging.

The albums closer, “Farewell Summer,” is also a reference to a Ray Bradbury novel, namely the sequel to Dandelion Wine. The novel itself is about the young declaring war on the old. The lyrics touch on this somewhat with the line “All my friends have been married, buried, or carried away.” Instead of outright war, the band in Heaven outwardly demonstrates their dissatisfaction with the rituals of life, embittered perhaps with the thought of being forced to remain in youth, grasping for the paths in life that were afforded to so many, but always out of reach for them.

A band that started off as a two piece dream-pop / noisegaze act has grown in a muscular 5 piece indie rock outfit, borrowing as much from Factory Records as they do from the 90’s No Wave movement and the contemporary sounds of Modular People and Captured Tracks.

Caught in a Summer Swell