The Asteroids Galaxy Tour-Out Of Frequency 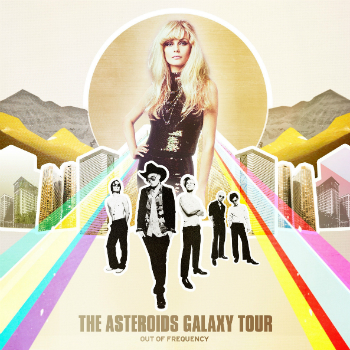 Danish psychedelic indie popsters, The Asteroids Galaxy Tour are to release their second full length album entitled Out of Frequency at the end of this month. The album follows their full length release Fruit which threw them into the limelight in 2009. From Apple choosing their track Around the Bend in their iPod Touch commercial to supporting Katy Perry on her sold out tour, the band quickly gained recognition.

Formed in 2007, the band is based in Copenhagen. The core band members are vocalist Mette Lindberg, and producer/primary songwriter Lars Iversen however when they get on stage the band extends to include Miloud Carl Sabri on trumpet, Sven Meinild on the sax, Mads Brinch Nielsen on guitar and Rasmus Valldorf on drums.

Out of Frequency is a seventies influenced fusion of horn sounds, positive energy and edgy vocals (and the band has the seventies image to match). The instrumental tracks that open the album, Gold Rush Parts I and II, are split by the loud, energetic song Dollars In The Night, which gives listeners their first glimpse of Lindberg’s unique voice.

Her voice is squeaky and weird sounding as well as being soulful, in the single Major (released late last year) she sings boldly “Stick to the simple rules, remember who’s protecting you, the filthy streets will eat your soul if you don’t take control. Get a car, get a gun, show the world what you have become…this is what you got: major ambition” in a high pitch before ending the track with “come on” and a squeal. Heart Attack begins with the drum beats, rattles and build up similar to a psychedelic dance track by Deee-Lite or something from a sixties funk record.

The album’s title track is a slightly more chilled in parts, however the chorus picks up the pace with fast keys before a flute solo takes the song to another place completely. Just when a song starts to sound more pop influenced, the band bring in some weird instrumentals or latin beats to spice things up. Stylistically diverse, songs like Suburban Space Invader – a child-like ditty filled with loopy whistle sounds and spaced out keys – sits side by side with Fantasy Friend Forever a track driven by guitars and drums and lower vocals from Lindberg.

It’s safe to say that the album won’t be to everyone’s taste, but it certainly isn’t boring. Out of
Frequency is a lot of fun and will get you dancing. Recommended for fans of The Jackson 5 or Amy Winehouse.