The Aislers Set, who were one of the most beloved indie pop bands of the late 90s / early 2000s. They are re-forming to play some shows around these reissues. This makes up their entire catalog, with another collection of rarities due in early 2015. The two Slumberland albums, Terrible Things Happen and The Last Match, have a street date of Sept. 23. The band’s third album for Suicide Squeeze, How I Learned To Write Backwards, has a street date of Oct. 14.

Slumberland Records and Suicide Squeeze Records are proud to join together to re-release all three albums from seminal indie ­pop band The Aislers Set. The albums have been re­mastered, and in the case of How I Learned To Write Backwards, re­-sequenced. All three will feature new eco-­friendly CD packaging and will be available on vinyl LP for the first time in at least a decade. Furthermore, the band will play a select set of West Coast shows this Fall, and a new album of singles and rarities is being prepared for release in early 2015.

Terrible Things Happen (originally released in 1998) and The Last Match (orig. released in 2000) are the first releases in a projected year-long celebration of Slumberland’s 25th anniversary, they will both be released on Sept. 23, 2014. How I Learned To Write Backwards (orig. released in 2002) will be issued on Suicide Squeeze on Oct. 14, 2014. Look for more reissues, special gigs and publications soon. 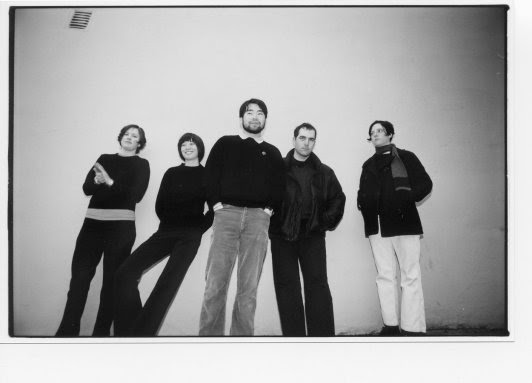 The Aislers Set occupy an enviable place in the pop pantheon. Brimming with drunken romanticism, sharp pop sensibilities and timeless melodies, The Aislers reveled in the history of great POP, spiking their classicist 60s­-tinged tunes with pure post­-punk energy and originality of bands like the Fire Engines and The June Brides. Every song is a meticulously constructed sound world, where the arrangement and instrumentation sublimely, uncannily bring each tune to completeness.

The Aislers Set began in 1998 as a vehicle for the songs of Amy Linton, who had most recently co-­led San Francisco’s legendary Henry’s Dress and drummed in Go Sailor with her pal Rose Melberg. With Henry’s Dress she had helped guide the band from it’s noise/drone beginnings to the explosive mod/punk fusion that made them such a force to be reckoned with. With The Aislers Set the original goal was just to write, record and document.

The result was the first Aislers Set album, 1998′s Terrible Things Happen. Not content to merely (!) write some of the most sublime pop tunes this side of Ray Davies, Linton got busy in her garage studio and recorded and produced almost the whole record by herself. It’s a remarkable feat, and a love for such producers as Phil Spector and Brian Wilson shines from each and every groove. This is no shameless 60′s pastiche, though, with the echoes of classic pop past filtered through a totally 90′s aesthetic. It’s a beautiful, multi-layered record and a genuinely great achievement of home recording.

During the course of recording Terrible Things Happen, Linton was joined by some friends who became the full­-band Aislers Set line­up: Alicia Vanden Heuvel on bass, Yoshi Nakamoto on drums, Wyatt Cusick on guitar and Jen Cohen on keyboards. It’s this fantastic line­up that toured the US and Japan in 1999 and put together the second album, 2000′s The Last Match. Where Terrible Things Happen‘s synthesis of 60s mod-pop, 70s punk and 80s/90s indie flavors provided an end-­of­-the­-century summation of where pop had been and where it was heading, The Last Matchupped the ante even further.

More ambitious in conception, The Last Match expanded the band’s sound into more orchestral areas. While the songs are still driving and catchy as a fish hook, the arrangements are far more sophisticated. The instrumentation has been augmented by Jen’s vintage keyboards/organs and various horns, giving the tunes the timeless feel of classic groups like the early Bee Gees, The Zombies and The Millennium. Still preferring to record in the garage where they were allowed unlimited time for experimentation, the band had no problem crafting an amazing sounding album that could have sprung fully-formed from the hallowed studios of Gold Star. This is no murky lo­-fi production, but a fully­ rounded and rich ­sounding recording with a warm, analog sound.

The Last Match was a roaring success, garnering fantastic reviews and spurring the band to tour the US, Japan and UK multiple times, with bands (and fans) including Belle & Sebastian, Black Dice, The Gossip, Erase Errata, Comet Gain and Sleater­-Kinney. The band even achieved the ultimate badge of indie honor, recording a session for the legendary John Peel. Even more, The Last Matchestablished The Aislers Set as one of the most beloved indie­ pop bands of their generation. It was a must­listen album, one that fueled fond memories, sparked love affairs, set off spontaneous dance parties, and reminded us all of the power of songs and song­craft and POP. It’s chiming guitars and indelible melodies were heard everywhere from London to Tokyo, from Glasgow to Malmo: with The Last Match, The Aislers truly came into their own.

2003 saw the release of the band’s final album, How I Learned To Write Backwards. At once more baroque and edgier than its predecessor, How I Learned To Write Backwards expertly wound together so many strands of pop history with such personality, atmosphere and style that there’s never any doubt that you’re listening to a band with vision. Far from being a “name the reference” game, The Aislers used the past as inspiration rather than a blueprint, so the echoes you might hear of, say, Phil Spector’s Wall of Sound or Laura Nyro’s soulful lyricism are so well­ integrated into the Aislers’ sound that they’re more akin to the spice in the stew rather than the stock of the soup.

While the band had stopped playing and recording together by 2004 thanks to life commitments, their reputation has only grown and sporadic reunion shows, most recently in NYC for the Chickfactor 20 celebration, have met with rapturous response.