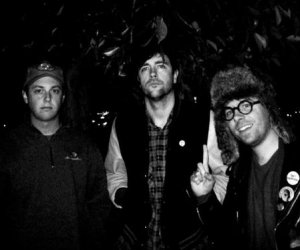 San Francisco trio Terry Malts are set to release their new record, Nobody Realizes This Is Nowhere on 9th September via Slumberland Records, featuring 11 punk-spirited noise-pop songs marked by Phil Benson’s very post-punk vox. Listen to new album cut, ‘Walking Without You’ above.

Notes from the Malts Mansion: Spring, 2013

I’ve disconnected the doorbell; the phone is off the hook. The post office has been instructed to return all mail sent c/o Box 489 directly back to sender. These extreme actions have not been made in haste. The past year-plus has plum worn me out.

Ever since Slumberland Records lost a bet and released 2012’s Killing Time, it seems that the bored drudges of this outhouse Earth have done nothing but follow that album title’s orders, a.k.a. harass me. (Lord knows the everyday “fan” of these “guys” has nothing better to do). Visitors, calls, letters. Look, I know I’m the only known liaison to the men behind the man, but that doesn’t mean I have the answer to the burning question on everyone’s melon: WHEN IS THE NEXT TERRY MALTS ALBUM COMING OUT?!

Oh, wait, actually I do know the answer to that one! Terry Malts’ brand-new platter, Nobody Realizes This Is Nowhere, is being released on 9th September, 2013 in the UK, once again on Slumberland Records. The official full-length follow-up to last year’s year-end-list-thrashing debut, hot on the heels of two more blistering 7”s in the meantime.

Who are these Nobodies? Where is this Nowhere? The same crack-staff has been employed: Phil Benson (bass, vocals), Corey Cunningham (guitar, throat), and Nathan Sweatt (drums, confusion), recorded by they-damn-selfs in their “San Francisco practice space”, and again mixed by Monte Vallier(Weekend, Half Church). Hey, Parrothead: changes in latitudes, changes in attitudes, right? Right! Which is why the Malts tropes you’ve come to know and love haven’t gone anywhere: anger, hatred, exhaustion, delusion, seclusion, consumption, life, death, breathing, eating, and probably some sensitivity or something. It’s all right in front of your earballs!