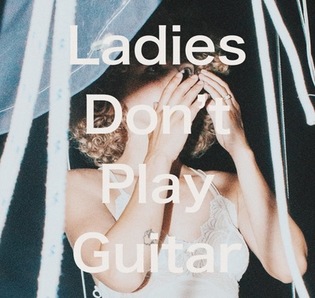 Tennis are an indie pop duo comprising husband and wife Patrick Riley (guitar, keyboards, production) and Alaina Moore (vocals, keyboards). They met while students in Colorado, and after graduating college they bought a sailboat and spent seven months sailing along the Eastern Seaboard. Post-adventure, they moved back to Colorado, and after getting settled began recording songs that had a modern lo-fi feel but a sweet ’50s pop heart. The songs were inspired by their trip and the discussions they would have about music while on board their boat (the Swift Ranger). A few releases later and several tours, Tennis have shared their brand new track “Ladies Don’t Play Guitar”.

“Ladies don’t play guitar was the first line I wrote after finishing Ritual In Repeat. It reflects all the times I was told to ‘get out from behind the keyboard and be a front person’–as though my instrument was a prop rather than sonically integral–to smile more, to make eye contact with my bandmates during a show, to look more like I’m ‘having a good time,’ or the many instances in which my writing credits were mistakenly attributed to my husband. I took a very intentional break from songwriting until I felt like I had something to say. Finally, I do.”