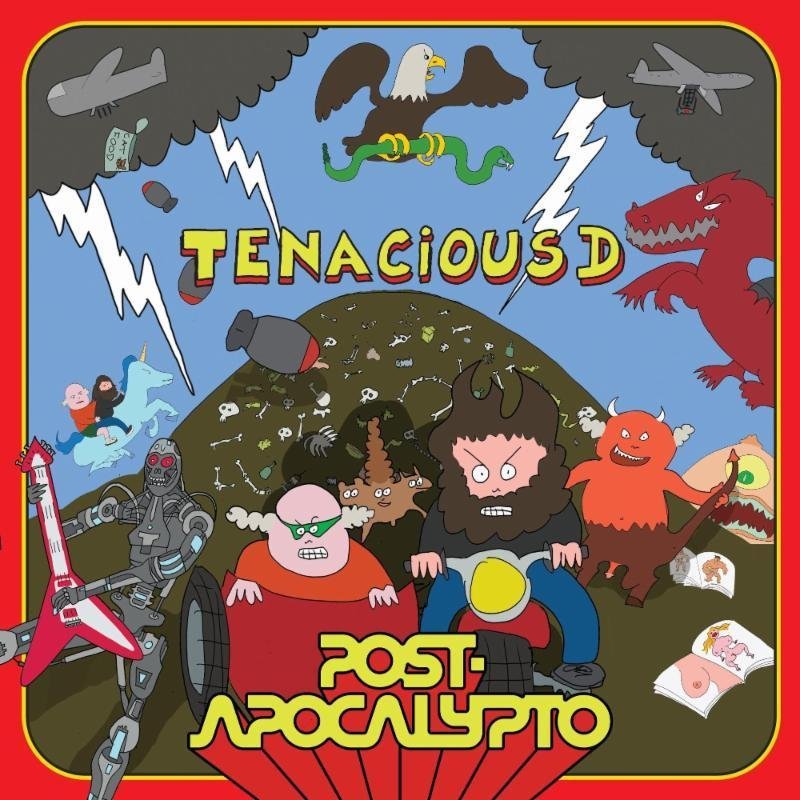 Tenacious D never fail to make us laugh, and their Trump-era inspiration works for a bizarre concept record that is so satirical it can actually be hard to notice. Admittedly the humour from Jack Black and Kyle Gass can make this Tenacious D album still feel like it’s in that “Teenage Boy” world, but as the album goes on, it starts to seem like that might be window-dressing to make sure younger listeners pay attention. Though this prevents Tenacious D from achieving a more timeless sense of comedy like work from Flight of The Conchords, the mix of skits and music assure they offer a unique listening experience.

All the fun of this album is easily summed up in their “Post Apocalypto Theme” which runs out with fire and pumping strums as fast as you can imagine. Among the jokes of many skits like “desolation” their political angle for the album becomes very much the centre of the record. Though this can make the satirical drive of “HOPE” actually work really well, the song’s inherent sense of cheese and silly calls on Gorgons may leave you divided on how to feel about it. Jack Black’s sense of performance elevates the work of Tenacious D, on songs like “MAKING LOVE” where they drive their comically cliché rock with narratives that will make you laugh and question your perceptions.

Ultimately many of the skits do actually work without the cartoons that Tenacious D originally set them to, but the lack of more sonic details definitely make them harder to deal with every other track. While it’s hard to separate the messages from the jokes throughout the record, songs like “TAKE US INTO SPACE” come off as less smart than they could be. Even the easily laughable lines of “Fuck Yo-Yo Ma” the inherent sexual toilet humour nature of the song overrides the situational power they bring to the table.

Looking at the album as a pure piece of comedy is hard as well, as something like “Daddy Ding Dong” can feel more like something that teenage boys sing for edgy humour, and eventually realize is more shock value than consistently funny. “Robot” works as a much stronger piece on the whole, as it tells a story that works outside and along with the whole record. Despite how much of a trope sad-song it is, Tenacious D is able to use their over-the-top personalities to make it like a power-ballad in this way. One could argue listening to a track like “MarCH” however in its on-the-nose political commentary, that perhaps Tenacious D is trying to open up the eyes of young listeners who have becomes lost in how to live in our current political conversation.

This lens becomes a lot more obvious on something like “Colors” as they soar across fairytale tones, and hard rock, pointing out how much variety and grey areas truly make our world beautiful. “JB JR Rap” puts an almost Disney-like spin on demagogues and “Woman Time” thinly veils a reflection of #MeToo with a more heavy metal valkyrie energy.